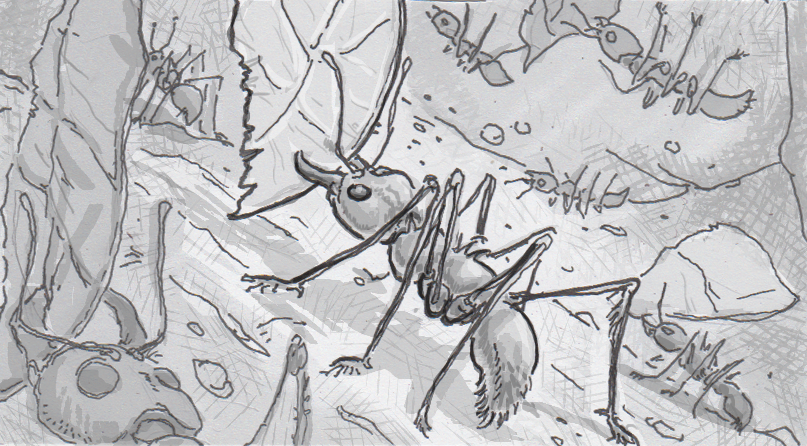 Leafcutter ants have farmed their way to a fungal superfood

Ever since Ancient Greece, ants have been pulling ahead in the race to be the ultimate farmers on Earth. Human’s have been developing technology very rapidly in our short existence as a species, but on a relative scale, we really should have come up with a more perfect food source by now. As things stand, even our best efforts at domestication and farming can’t claim to produce food so singularly nutritious and pest resistant as the fungus leafcutter ants cultivate. Part of their success has been to adopt some very gradual GMO strategies, shaping their favorite food into the most convenient crop possible.

From gathering to growing

Ants started looking into fungi farming shortly after the demise of the dinosaurs, some 55 million years ago. At first, the fungi they were eating was found out in the forest, growing on rotting bits of wood and plantlife. Studies of the ants’ genetics shows that once they got a taste for fungi, the ants started specializing, dropping genes that didn’t help them gobble the new food source. Within 30 million years, the ants were so committed to this diet that they started reshaping the fungi on a genetic level.

25 million years ago, one lineage of leafcutter ant ancestors became the first farmers, not just eating fungi but actively cultivating them. They were raising the crop in their own colonies, and selecting for variations that provided more nutrients, transforming the nature of the fungi themselves. Higher amounts of nutrients allowed for bigger ant colonies, which could then raise and essentially breed fungi all the faster, kicking of millions of years of co-evolution for both organisms’ benefit.

By 15 million years ago, the first true leafcutter ants had evolved. The fungus they live on at this point is completely domesticated, as it no longer produces enzymes that once enabled its ancestors to digest rotting flora in the wild. Instead, it depends completely on the ants to provide a steady flow of freshly cropped leaves, which the ants readily retrieve from the forests of South America where they live. The ants are nearly equally specialized, producing enzymes to specifically digest the “superfood” their engineered fungi produce. The relationship is somewhat strict, but it’s also very successful, as the leaf harvesting that powers this agricultural relationship make this duo the dominant herbivores in tropical forests.

It might be hard to convince humans to eventually live exclusively off of one fungal byproduct, but given enough time, we might grow and evolve to like the idea these ancient ants came up with.

Source: After the age of dinosaurs came the age of ant farmers, Phys.org