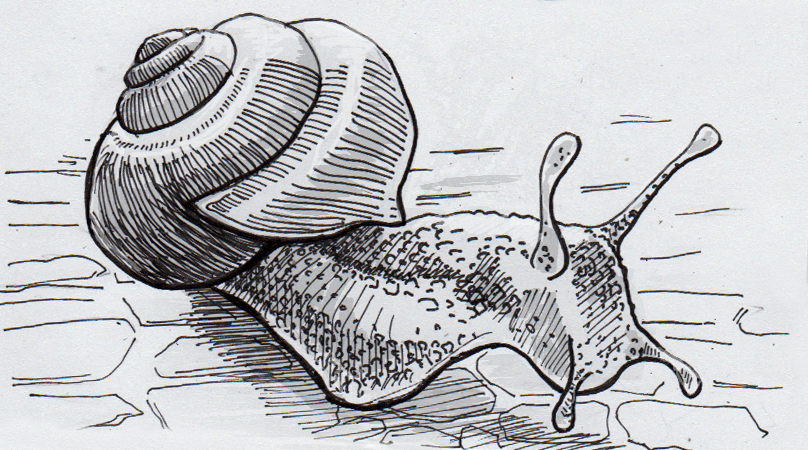 Learning about snails with my kindergartner

Tonight was a bit of a milestone, as my kindergartner read a book about garden snails by herself and was happy to share her very own new thing for the day. What follows is as faithful a reproduction of her reporting as is practical, along with a few other annotations and related trivia for good measure.

Take it away, kiddo:

The mommy snails first lay little white eggs in a hole. When they’re little, they look like a grown up snail, except they’re all white. And they’re littler. [This would include all snail parents, as they’re hermaphrodites.]

So after that they grow their wrinkles (as in the wrinkles on the top of their foot.) They also grow the twists [or whorls] in their shells. And they grow their color. And then, they’re still small. But then they grow bigger, into a grown up. They’re gown up in two years, and they live five years.

Here in northern California, we seem to get just enough moisture to see snails infrequently enough that the kids get excited to find one. While part of their low profile is due to being primarily nocturnal, they may also be spending much of the year hibernating behind their epiphragm. A epiphrapm is basically a mucus membrane the snail uses to seal itself in its shell, protecting its soft body from both the elements and would-be predators like ants.

Oh, and some snails use something called “love darts” that I’ll let you all look up on your own.