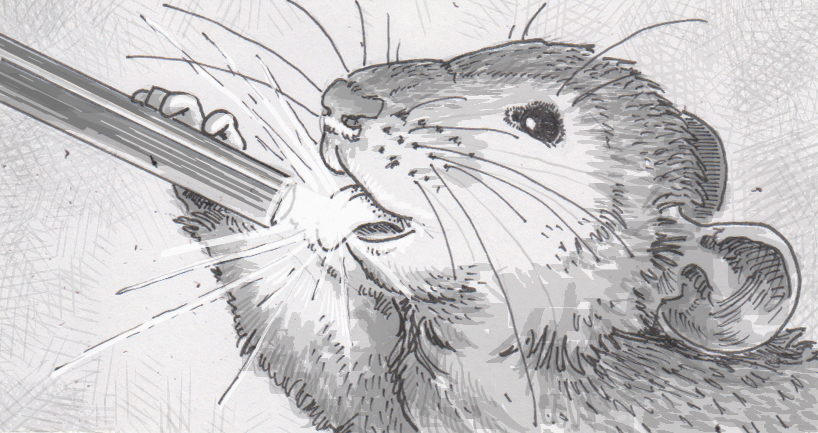 Lab mice have been trained to drink light. This involved a bit of work, but the motivation wasn’t so hard since the mice were convinced they were drinking water. The trick was just engineering them to have tongues that could mistake a stream of photons for an actual sip of H2O, which is neat since most of us can barely describe what water tastes like in the first place.

Backing up a bit, researchers were looking for the physiological mechanisms that tell an animal when it’s drinking water versus some other, less hydrating liquid like oil. Our sense of taste informs us about most of the food we put in our mouths, although that requires distinct flavors and smells, which isn’t something we associate with (clean) water. Neurological evidence suggested that our brains have a distinct response to water in our mouths, but to figure out what triggers that activity, researchers started messing with mouse tongues.

Mice were bred with various alternations to the genes governing their taste receptors on their tongues. With a type of receptor disabled, the mice were offered water or similarly clear, tasteless silicon oil to see if they noticed any difference. The mice that lacked receptors normally associated with sour, acidic flavors took longer to notice the difference, so researchers targeted those cells for the next phase of experimentation.

Light instead of liquids

The next step was to raise mice with optogenetic taste receptors on their tongues. Optogenetics is a research technique that makes specific types of cells sensitive to light. Often used in studies of the brain, researchers can then target and activate the genetically engineered cells to prove their role in a particular process. In this case, the sour-sensing taste receptors were made sensitive to light, so that light on the mouse’s tongue would be perceived as a normal food or liquid stimulus, like water. Using a water bottle rigged to emit light, the mice lapped away at the light, eagerly attempting to quench their thirst even though no actual liquid was present.

At this point, the sour-sensing taste receptors appear to be central to how mice, and presumably other mammals, taste water on our tongues. Researchers suspect that drinking water normally washes saliva out of our mouths, changing the acid levels on our tongues to activate these cells. However, the light-drinking mice also revealed that further mechanisms must be at play when getting a drink. As much as the mice were convinced they were lapping up water, they never acted sated by the activity. It seems that the tongue may help indicate when we have water in our mouths, but some other mechanisms were waiting for a real liquid to indicate when to stop drinking.