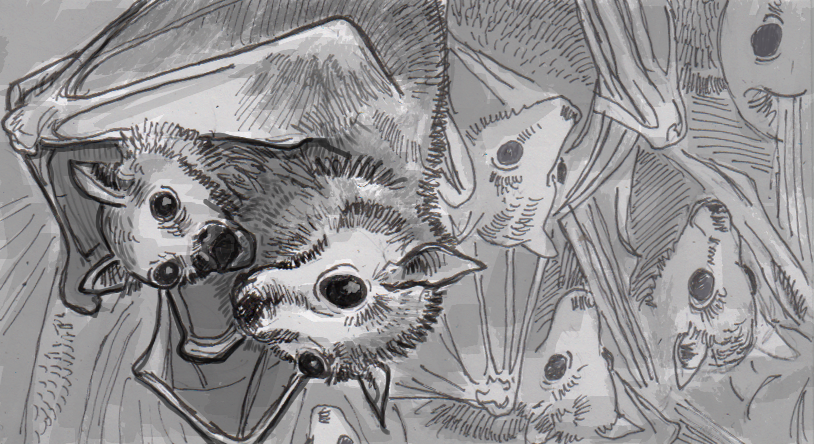 Like humans, baby bats pick up more speech patterns from their peers than from their mothers

For all the time and energy spent raising offspring, at some point every parent has to come to terms with the fact that they’re not only influence on their children. Whatever manners and language gets used at home, it’s nearly impossible for kids to avoid picking up the sound, style and charming phrasing of their peers’ voices. Apparently this is common not only among human families, but other social mammals as well, as researchers were able to induce the development of a non-native dialect, or group-specific accent, in baby bats.

Bats roost in groups, and spend a lot of that time chatting and bickering with each other. Like humans, baby bats develop their language skills by listening and imitating the sounds they hear in their local environment, which allowed researcher from Tel Aviv University to manipulate some bat pups’ emerging dialects. To do this, they placed some newborn baby bats with their mothers in a lab-controlled colony. When the animals were roosting, researchers played recordings of bats with dialects that contrasted from the pups’ mothers. They then observed and listed to the babies as their voices developed to see if they would sound more like their mother, or more like the artificial group they heard every day.

The pups grew up vocalizing in a dialect that sounded more like the recorded chatter than their own mother’s voice. This may sound intuitive to anyone who has heard the children of immigrants speak with the accent of their adopted country, but it’s significant to see it in another species. Songbirds, for instance, are known to learn songs from their elders but seem to be instructed by a single tutor, like their father. This seemingly left humans as the only animal that picked up language instruction from everyone in their local population, aggregating the pronunciation and grammar rules into what we think of as accents.

These bat pups shake those assumptions up, since they’re picking up a dialect from their community like we do. This means that this structure for language acquisition may have been put into a common mammalian ancestor’s brain long ago, or that it has evolved more than once thanks to how useful it may be. To test the utility of sounding like your neighbors, researchers are now planning to see just how much of a difference a dialect can make, studying how bat colonies interact with animals that don’t sound like they grew up in the same group.