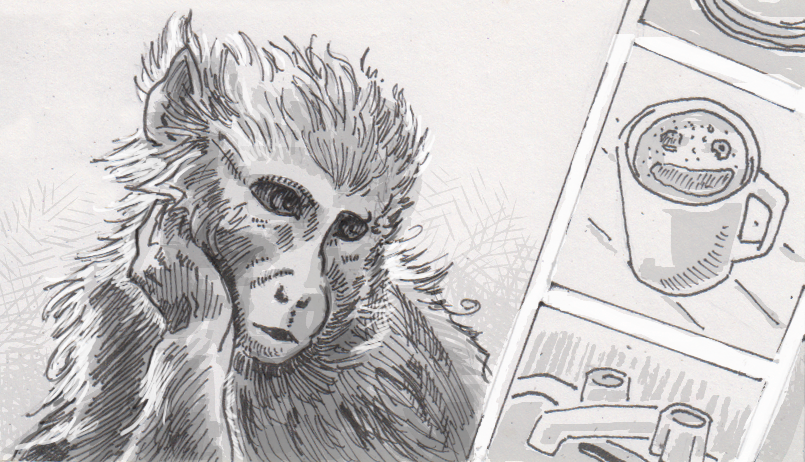 In a time when people have a hard time seeing eye-to-eye, it may be comforting to know that we basically see the same world monkeys do. Studies of various monkeys’ perception have found that our fellow primates react to visual stimuli similarly to humans, even making the same mistakes we do. For instance, both humans and rhesus monkeys might confuse images of large, gray animals like elephants and rhinos, even though the monkeys lack contextual information to relate those creatures to each other. The visuals were perceived along the same underlying neural pathways, making an individual response from a monkey nearly indistinguishable from that of a human.

Now researchers have found a new shared “mistake” between rhesus monkeys and humans, which is called pareidolia, or seeing patterns like faces that aren’t really there. Monkeys were shown photos of inanimate objects that they’d have no real understanding of, such as coffee cups, purses and appliances. Photos that happened to have that critical two-dots-over-a-line pattern of a simple face held monkeys’ attention much longer than versions that didn’t. Based on previous data showing monkeys prefer to look at faces over non-faces, plus eye-tracking data that indicates the monkeys were examining objects’ “eyes” and “mouths” most of all, researchers are confident the monkeys are noting faces the same way we do. In fact, the when given the choice between a photo of a monkey’s face and an object’s faux-face, the object actually seemed to be the more interesting option for most test subjects.

This fascination with faces isn’t surprising. Separate studies of macaque monkeys have found that the old world primates have the same functionality in their brain’s fusiform face area that we do. In that study, the monkeys recognized human faces as faces, despite our being a different species. Now that we know rhesus monkeys extend this activity to pareidolia like humans do, it’s increasingly likely that these socially-oriented specializations evolved in a distant, shared ancestor. Our interest in finding faces may not be a human trait after all, instead being shared among many primates that make a point to look into each other’s eyes.