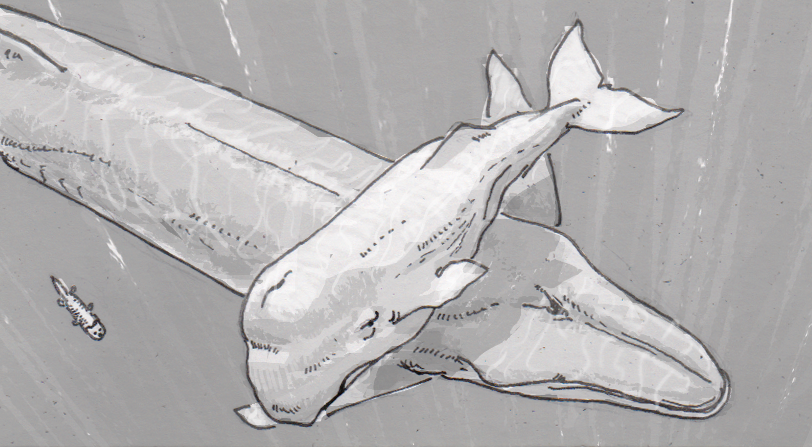 50 million years ago, a dog-sized mammal called Pakicetus apparently decided that it was increasingly tired of walking on its own legs like a sucker. Why use energy to support one’s own weight on land when it’s so much easier to just float in the water? Growing bigger would essentially be “free,” since a larger body would also provide more buoyancy, meaning there’d be no limit to how big an aquatic mammal could get. That line of thinking seemed to work out for Pakicetus‘ descendants, who now include blue whales as the largest animal to ever live on Earth. The only problem is that it seems to be wrong, as new analysis shows how marine mammals are actually in a tightly-constrained balancing act between large bodies and the difficulty of finding enough food to feed them.

Bounded by body heat and hunger

This study doesn’t dispute the idea that whales are bigger the average terrestrial mammal. Whales and walruses are big, but they have to be. In fact, they have to fall in a very narrow range of body sizes, unlike the diversity of creatures you find on land. So while a Eurasian water shrew (Neomys fodiens) is fine only growing a half-ounce body, any mammal living in the ocean needs to scale-up their body so that they don’t shed more heat into the water than their metabolism can keep up with. After a survey of 3,859 living and 2,999 extinct species, it would seem that the oceans require mammals, on average, to be at least 1,000 pounds, which is a pretty high floor to contend with.

That big, but warm, body creates its own constraints. Warm blooded mammals need a lot of food to operate, a need that scales up the larger an animal grows. So while a sperm whale (Physeter macrocephalus) can withstand cold temperatures deep underwater thanks to its thick body and layers of blubber, it’s probably as big as any hunter can get without inventing protein shakes to make calorie delivery easier. The big picture is that marine mammals simply can’t be as diverse as their counterparts on land because they’re trapped between the cold water and energetic demands of maintaining a big body.

Of course, sea lions aren’t the smallest mammals in the ocean, and sperm whales aren’t the biggest. However, outliers like sea otters (Enhydra lutris) and blue whales (Balaenoptera musculus) don’t necessarily disprove this model, because they’re both cheating to achieve their smaller and larger sizes. Otters do live in cold water, but not 24 hours a day. When they are in the water, their thick fur helps make up for the lack of insulation in their 50 pound bodies. Finally, sea otters are a relative newcomer to the ocean, probably adopting their semi-aquatic lifestyle in the last seven million years. If it eventually makes sense for them to spend more time in the open sea, they could very well balloon up to look more like seals and sea lions, probably giving up their fur in the process.

Blue and other filter-feeding whales have outgrown their toothed cousins by making significant changes to how these cetaceans eat. By giving up biting and chewing, they’ve managed to make their calorie intake more efficient, gobbling up over one thousand pounds of krill in a single mouthful. This doesn’t mean that filter-feeding removes the all calorie constraints on an animal’s growth any more than swimming freed animals from the work of walking on legs. It has helped whales grow larger, although they still have to work at it, carefully managing when and how to lunge for food so they don’t waste energy propelling their huge mass through the water. As such, we’re unlikely to see any animal grow much larger than a blue whale, unless they somehow simplify their calorie intake even further.

Maybe it’s time we introduced them to milkshakes so they can stop collecting krill like suckers?

Source: Why are whales so big? by Stanford's School of Earth, Energy & Environmental Sciences, Science Daily