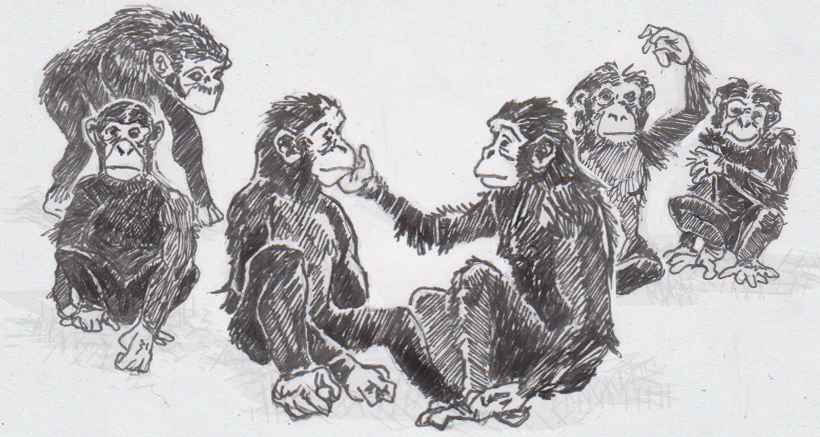 Looking for common meanings in chimp and bonobo gestural communication

You’ve probably never asked for a snack by rubbing someone’s mouth. It may seem like a weird way to make a request, but recent studies of our fellow primates indicate that humans may be the oddballs here. Both of our closest relatives, chimpanzees and bonobos, ask for things, most often the food, by rubbing the mouth of their compatriot, even mid-chew. As part of a larger survey of these species’ gestures, this shared bit of body language may say a lot about the origins of human communication.

Comparing the meaning of each movement

The first step in making sense of any of these moments was to try to define what each gesture meant. Starting with chimps, researchers carefully observed multitudes of interactions between animals, looking for discrete, repeated movements that could qualify as a gesture. This required that the first chimp made a movement, and would repeat that movement until they saw the desired change in behavior on the part of their audience. If the gesturing animal seemed satisfied with this new behavior and stopped repeating their movement, researches assumed that the request had been properly fulfilled.

If that same movement was used between many individuals with similar results, it was assumed that the intention of the gesture was ‘decoded.’ Once a set of chimp vocabulary was assembled, the same process was repeated with bonobos so that the two species’ gestures could be compared. While there would be a fair chance that similarly built animals would use the same movements in their daily interactions, the real question was if those movements served the same purpose.

In addition to the mouth rubbing requests, a number of gestures were apparently shared between bonobos and chimps. Flicking the back of one’s hand at another was, as with humans, a shooing motion, intended to tell the viewer to move away, or with bonobos, simply stop what they were doing. Walking up and displaying a body part, like an arm, was universally understood to be a request for grooming assistance.  Exaggerated scratching movements was sometimes a grooming request, but could also be interpreted by chimps as an invitation to travel together. A flexed arm, as when flexing a bicep, was a bit messier— chimps might use it to ask for an object, or command a peer to move closer or farther away. Bonobos were more likely to use it as an invitation for a piggyback ride, grooming or copulation.

These similarities don’t mean that chimps and bonobos could easily communicate with each other. Aside from the more obvious differences in meaning, there’s a good chance that smaller details in a movement carry more meaning that human observers can appreciate. On top of that, some individual animals were known to add their own flourishes to these gestures, such as a bonobo that punctuated his arm flexing with a puffed out chest (which his audience apparently appreciated!)

Caveats aside, the amount of overlap between these two species goes way beyond mere coincidence. While it’s possible that both chimps and bonobos started rubbing mouths independently of each other, researchers think that it’s more likely that they inherited this movement from a shared ancestor. Based on how integral communication is to humans, there’s a chance that the shared ancestor in question may be shared between humans, chimps and bonobos. To see if humans still have some biological foundation that primed these gestures in our brains, the next investigation will look at how much human communication overlaps with our primate cousins, maybe excluding the mouth-grabbing.