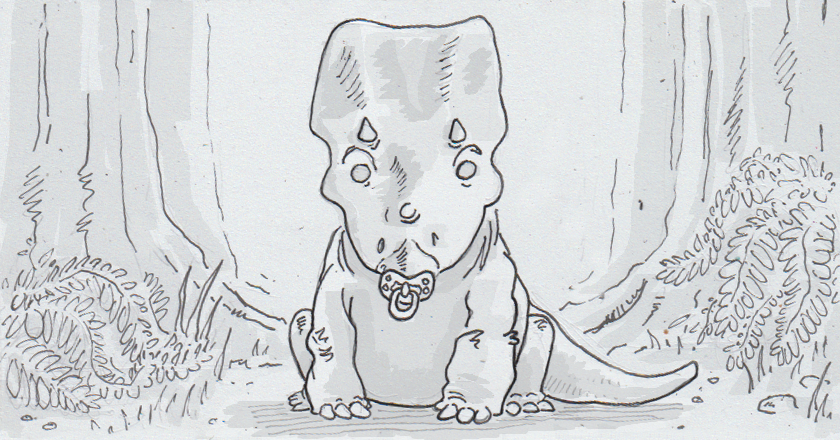 Looking for objective proof of a dinosaur’s youth

If you found a fossil skeleton of a minified dinosaur, with large eyes, small little horn nubs, and other child-like proportioned, it would be hard to not want to call it a baby, pinching the remains of what would have surely been some adorable little cheeks. A beautifully preserved Chasmosaurus was recently excavated with many of these traits, but scientists have to be cautious about when to call such a creature a baby, since in the realm of unwitnessed, extinct animals, it could possibly be a smaller species we haven’t found before. In this case, however paleontologists have been able to move asses the wee ceratopsid’s age and identity with methods a bit more objective than kinderschema alone.

Methods for calculating dinosaurs’ ages have been improving over the years. Growth rates were once extrapolated by comparing the estimated mass of a creature and the growth rates for living animals of similar sizes. Aside from not being an useful method for larger dinosaurs, it was also subject to variability by being based on estimated mass. Fortunately, these methods fallen way to more measurable evidence, such as growth lines in the fossils themselves.

Growth lines in fossils can show the rate of growth in an animal’s bones. Those rates are believed to be somewhat cyclical, so that in many cases the growth lines can act like rings in a tree stump, keeping count of the dinosaur’s age. Larger creatures muddle these counts a bit, as their bones seem to sometimes reabsorb some of the tissue from an earlier age, but it’s still a more reliable, quantifiable method to determine a bone’s age at time of death.

In the case of the aforementioned Chasmosaurus, the nearly complete skeleton retained a number of other age-specific indicators, visible to the naked eye. The overall texture of the bones was smoother than an adult, as the young creature was both growing new bone without the lifetime of dings, dents and scars that would be found on an older body. Some vertebrae had not completely fused, and of course some of the bodily proportions were indeed cute, er… underdeveloped. Specifically, the dinosaur’s frill lacked some of the bony knobs, called epiossifications, normally found on a mature Chasmosaurus.

To truly rule out the possibility that this skeleton was from a coincidentally immature-looking species, the researchers turned to a computer that wouldn’t be emotionally swayed by potential cuddliness. The program compared this specimen’s traits to other known species, and found that it could if not for the age-related morphology, this could be a primitive ceratopsid. When controlling for those features, however, the remaining traits were all matched for known Chasmasaurus. So we can now, objectively, coo at the little guy.