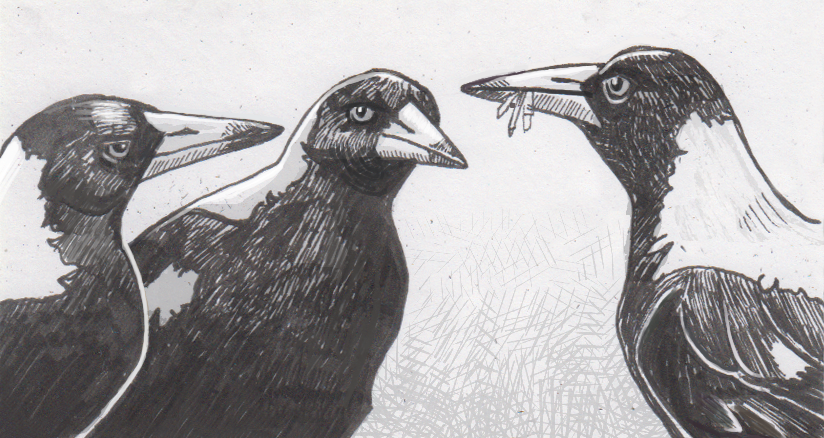 As a brain-heavy species, it can be hard for humans to imagine how more brains aren’t always the best option for an animal’s evolution. After all, without our cognitive abilities, how could we synthesize medicines, build rockets, and argue on social media all day? Oddly enough, as stupid as the “discussions” on social media can feel sometimes, they may be a part of what drives cognitive development in the long run. A study of highly social birds has found a correlation between social interactions, intelligence and even reproductive success. At least for Australian magpies, a bigger social group seems to be tied to better problem solving and a fitter family.

Like other crows, ravens other notably-brainy birds, Australian magpies (Gymnorhina tibicen) are very social animals with excellent memories. In the course of their 25- to 30-year life spans, they can build lifelong bonds with their social groups, which can vary anywhere from three to 12 birds in a flock. Like crows, they’ve even been known to learn the faces of specific humans, remembering how those humans treated them in the past to interact more appropriately in the future. This alone seems like a benefit of their intelligence, but clearly that intelligence has been developing before the birds had to react to humans on a daily basis. It’s been hypothesized that needing to understand and interact with their fellow magpies may have been enough to push the birds’ brain development.

To test the connection between a magpie’s social group and problem solving skills, researchers tested individual wild birds with different sorts of tasks, generally designed around gaining access to some food. The birds were different ages, but all generally younger to reduce the chance that they would have prior experience with these tasks. The challenges consisted of things like retrieving food from a clear tube, requiring the bird stop approaching it directly from the side of the tube, and muster the self-control to go after it from the ends where an opening was. Another task required that the birds remember a specific color cue over time to earn a food reward.

In each case, birds that lived with larger social groups performed better than those that lived in smaller groups. That alone doesn’t really explain the origin of the birds’ intelligence though, as it doesn’t demonstrate that one attribute lead to the other. However, researchers also found that the more successful female magpies tended to have more offspring than their more befuddled peers. Since the average magpie only has a 14 percent chance of successfully breeding, even a small reproductive advantage would be important. While this doesn’t specify how problem solving or living in a large group directly benefits reproduction, there’s a least a model for how these traits would be propagating in the magpie population.

My third-grader asked: What if the bigger groups just have more teamwork to solve problems? Or what if they can share more information with each other?

By working with juvenile birds, they hopefully had to approach their food-finding tasks without prior knowledge of how to solve them. With that said, magpies have been observed watching and apparently learning from each other’s behavior, so the idea that these birds are sharing knowledge as some kind of culture can’t be written off entirely.