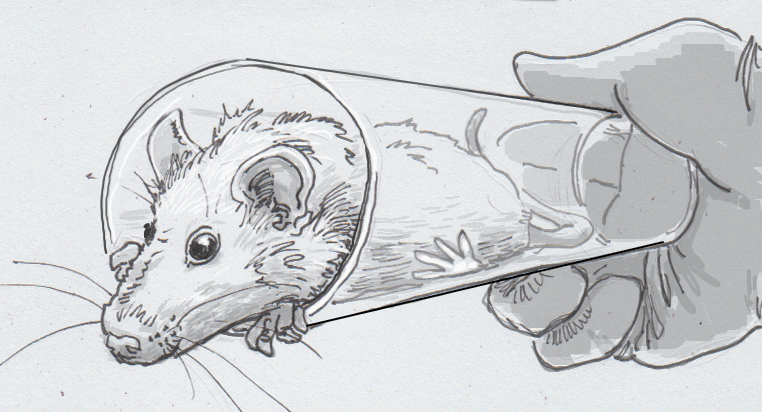 In laboratories around the world, the most common way to handle a mouse participating in an experiment is to pick it up by the base of its tail. It’s quick, relatively painless, and easy to teach to new lab members. However, researchers at the University of Liverpool have also found that it is, perhaps unsurprisingly, stressful to the mice. A series of experiments has found that this stress may go beyond concerns for the mice’s well-being, and be significant enough to influence the outcome of experiments.

The mice were first tested to see how much they responded to what’s normally an enticing lure— the smell of an opposite-sexed mouse’s urine (yum!) Instead of being hoisted by their rear-ends as per traditional methodology, the experimental mice were moved out of their cages in what was called a “mouse-friendly tunnel.” The mice were gently herded into the clear piece of plastic piping, at which point they could be moved relatively gently. Even mice carried in an open, cupped hand seemed more at ease with their handlers. Compared to the control mice that were picked up by the tail, the tunnel- and hand-transported mice exhibited much less stress, exploring and investigating the urine as expected instead of defecating and urinating themselves.

A follow-up offered the two groups of mice two different urine scents to investigate. Mice who had ridden in the tunnel showed discrimination between new and old scents, showing responsiveness to experimental stimuli. The tail-handled group did not, and showed no indication they noticed, or maybe just cared, about the difference. This shows that aside from the general activity levels of the less-stressed tunnel mice, mice handled by their tails may not be responding to the cues researchers assume they are. Their unhappiness with their handling may override the very responses an experiment intended to test.

This tunnel experiment is part of a growing interest in lab mouse stress levels. In 2014, researchers found that the presence of nearly any male, non-mouse animal, from guinea pigs to humans, raised the stress levels of lab mice. Mice that could smell a male animal, such as a male researcher, had elevated levels of the hormone corticosterone. Aside from potentially affecting how well the mice could discriminate experimental stimuli, the high amounts of corticosterone also dulled the mice’s pain response by as high as 40 percent.

Obviously, this may skew experimental results, especially if researchers aren’t aware of these variables. To compensate for the mice’s biases, researchers may need to note the sex of the people who handled the mice in experiments, and try to design experiments so that these sex-ratios are constant at all times. It may not be as simple as a plastic mouse-tunnel, but it turns out that mice aren’t as simple as we’d hoped either.

Source: Results of mouse studies deeply affected by the way the animals are handled