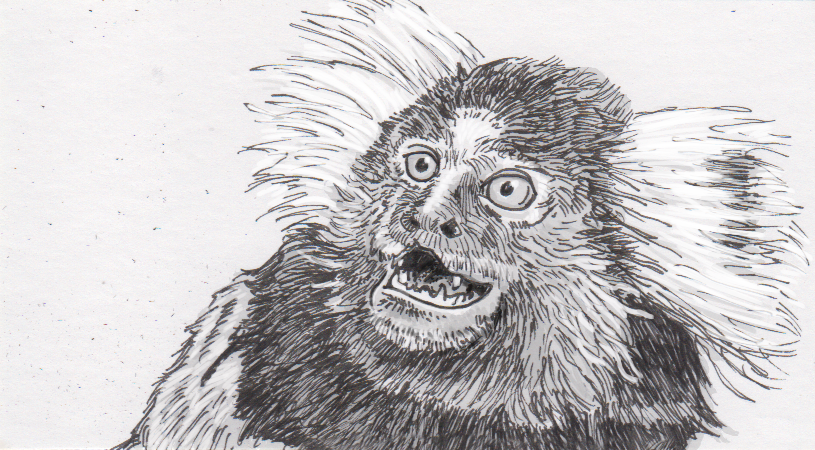 Making sure we can measure how marmosets manage their speech

Your typical marmoset conversation has a lot of “tskiks,” “ekks,” and “pheees.” From a human perspective, it’s a pretty limited set of sounds— plenty of birds and signing apes have bigger vocabularies at their disposals. However, since marmosets are primates like us, and these are sounds they naturally use to communicate, they’re a good model organism to work with; they offer a simpler version of speech that was likely inherited a shared ancestor. The catch has been that, until very recently, it looked like marmosets were breaking a key rule of how we can talk.

Previous research has found that humans can form a syllable, as the smallest unit of speech, seven times a second. This is due to both biomechanical limitations in our voice boxes and neurological limits in our brains. It makes sense that these two systems would have evolved to match each other, and researchers want to know exactly how they synced up in our species’ past. Presumably, an vocalizing primate like a marmoset would be a good reference point, but only after the confusion with their “pheee” sounds were cleared up.

While a marmoset’s “tsik” and “ekk” sounds clearly functioned as syllables, their “phee” sounds were problematic, because they were too long. When listening to marmosets ‘speaking’ to each other, it seemed like the “phee” sounds could be drawn out in a way that let them cram in an irregular number of syllables per second. If they could do this, it would mean that their brains were treating one sound differently than the others, raising questions about the definition of syllables as a basic unit of speech.

To test this, researchers started interrupting vocalizing marmosets. When an animal got chatty, they’d get an earful of white noise, just annoying enough to make them stop their vocalization. The idea was that they wouldn’t be able to pronounce just half a syllable when interrupted— “tsik” and “ekk” wouldn’t be divided down to “ts” or “e,” as the marmoset would at least finish that sound before their mouth and brain stopped talking. Those sounds did prove to be indivisible, but “phee” wasn’t so durable. It seemed that a long “phee” sound could indeed be split, meaning those long sounds were actually two units of speech put together. “Phee” wasn’t breaking the rules about syllables- we just hadn’t realized that those vocalizations were really “phee” and “eee” being pronounced back-to-back.

With this expansion of marmoset vocabulary, researchers have confirmed that syllables are a durable unit of speech in primates. This way of organizing vocalizations into 100 millisecond-chunks likely evolved long ago, as humans haven’t shared a common ancestor with New World monkeys like marmosets for at least 35 million years. With this confirmation, researchers can move forward on figuring out how all primate speech ended up with our syllabic speed limits.