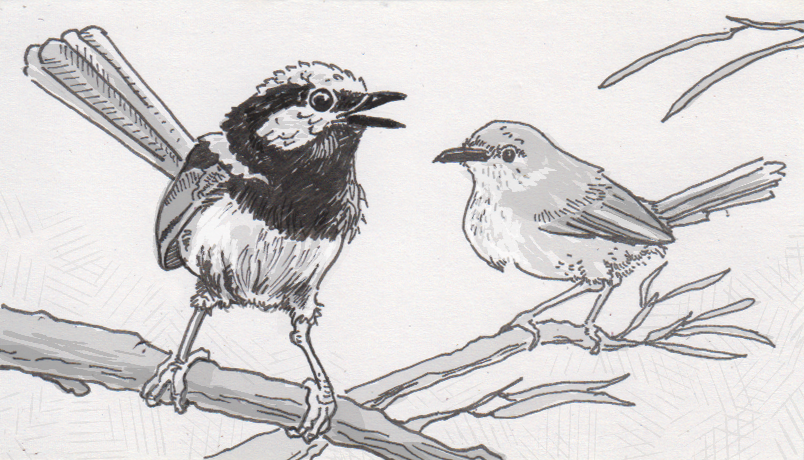 Superb fairy wrens are apparently worried about being too good looking for their own good. Like many sexually dimorphic animals, the male wrens sport bright, eye-catching plumage to attract potential mates, with high-contrast blue, black and white feathers. However, unlike many species, the male birds only strut their stuff during late winter or spring when it’s time to find a date. In the fall, they moult to replace those colorful feathers with light-brown versions that are much closer to the more subtle plumage of females and adolescents. Getting dressed up for mating season may come at a price though, as anything that might catch a female’s eye can also attract unwanted attention from predators.

Researchers wanted to see how much the male birds worried about their increased visibility when dressed up to impress potential mates. Recordings of alarm calls were played to specific fairy-wrens to see if the birds would flee the area. Subsequent behaviors, like how much the wrens surveyed their surroundings, or the time it took for them to return to their original perch, were also compared between brown and blue males. As you might expect, the blue males were aware enough of their striking appearances, and behaved much more cautiously than their brown counterparts.

Safely sitting on the sidelines

Other birds seemed to be aware of this difference as well. Since superb fairy-wrens form mixed social groups, brown, non-mating males were often in the company of the blue birds. When alarm calls were heard, the brown males were even more casual about possible danger if a blue male was nearby than normal. They basically dropped their guard, allowing the nervous blue bachelor to be their lookout, or maybe even a decoy that would attract predators while they sat in relative, low-contrast safety.

While heightened fear responses in blue-clad males could be tied to physiological changes in plumage, the fact that brown males adjust their behavior in this way when a blue male is around suggests a different sort of mechanism. The brown fairy-wrens seem to have some degree of awareness to understand that a mate-ready male is more likely to be seen than they are, adjusting their behavior for specific circumstances as they arrive. Essentially, it’s a time when being a wingman doesn’t mean taking one for the team, and they know it.

Source: The trouble with being a handsome bird by Silvia Dropulich, Scienmag