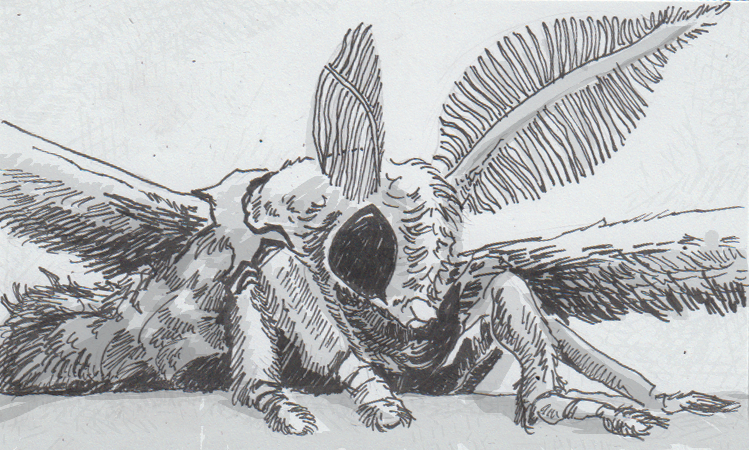 Male insect anatomy focuses on finding females instead of inspiring them

Is there anything as masculine as fluffy, feathery antennae? For a batch of sexually dimorphic moths, probably not, although appearing masculine isn’t really of much concern. While many dimorphic animals have special anatomy, such as a peacock’s tail, intended to help males land a date, moths’ antennae are more oriented towards simply locating one. Some hawk moths, tiger moths and a few others use their fuzzier feelers to pick up traces of pheromones from females, even if those females are a mile away.  Which is impressive, but not necessarily to the female of the species.

The other dimorphic features on moths are less obvious, but similarly don’t seem to be there to help a moth impress a mate. On the abdomen of some male moths you’ll find claspers, which are small folds of genitalia that secure females during mating. They’re not always visible in moths though thanks to the general fuzziness, in which case you might look at the underside of the moths wings, assuming the delicate insect feels like cooperating. Coming out of what you might consider to be the moth’s shoulder, you might see either a longer, thicker hair, almost like a whisker, or a tuft of hair under the wing. These structures are the retinaculum and frenulum, which are like special reinforcing hairs to help support the wings from below. On male moths, it’s usually the single, thicker hair while females have the tuft of thinner follicles, possibly to help anchor eggs along her body.

Looking across other species of insects, a fair amount of male-specific anatomy is focused on the practicalities of finding a mate rather than convincing her that a male is worth mating with. Beyond moths, a batch of wasps and beetles, like the longhorn, have more developed antennae to help them smell signs of potential mates. A variety of flies rely more on vision for than pheromones, and so males will often have proportionally larger eyes than females. Mosquitoes track their dates with sound, picking up the annoying whining sound of the females’ wings through fuzzier antennae.

This is not to say that male insects never try to win the favor of females. Some species engage in elaborate behavior to try to stand out as a suitor, with many spending their entire adult lives pursuing nothing but a chance to reproduce. It just means that for many insects, the clothes don’t make the man as much as his actions do.

Source: How to Sex a Moth by Chris Grinter, The Skeptical Moth