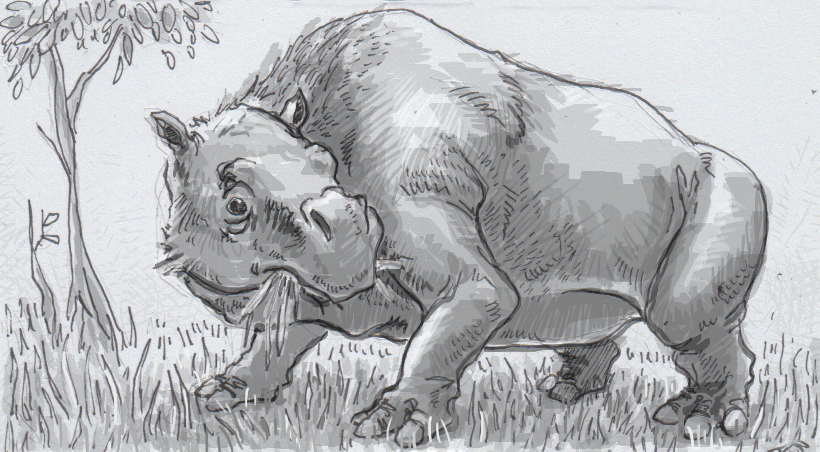 As an omnivorous mammal, you probably feel like you can really pack away a fair amount of food. With the right, if ill-advised, strategies, you can really stuff in a considerable amount of meats, grains, vegetables and fluids into your stretchy stomach and intestines. The fact that humans don’t carry a hugely bulky torso around by default may be thanks to our meat-eating, but not in a high-protein-low-carb kind of way. Analysis of mammal, bird, reptile and dinosaur skeletons found that an animal’s diet might be tied to the shape and size of their chest and belly cavities, but only if they’re a mammal.

For a long time, scientists have assumed that one of the costs of an herbivorous diet was needing space to digest it. Plants take more work and time to digest, and so the idea was that any plant-eating animal would need more space for a digestive gut than animals that live off of meat. Cows make for a convenient example of this idea, with large, deep rib cages and guts big enough to hold their partitioned stomach.

Researchers wanted to test this concept though, measuring the torso cavity size of 120 tetrapods. Everything from a stegosaurus to a Sumatran rhino were compared using 3D models of each species’ skeleton. The expected difference between carnivores and herbivores was found, but only among mammals. For some reason birds, reptiles and dinosaurs didn’t show this clear difference in the size of their guts, suggesting that something about mammalian evolution is responsible for herbivores’ guts.

One place to look for differences is how many of these non-mammals eat. Many birds, reptiles and plant-eating dinosaurs made use of gastroliths to help digest their food. Gastroliths are rocks intentionally swallowed to help mash up food, basically doing the animal’s chewing on the inside when their mouth can’t handle the job. Gastroliths generally sit an an animal’s gizzard, where muscles in the abdomen help push them together to soften food before it moves to the stomach. However, because gastroliths weren’t universally used by non-mammals, and are used by some marine mammals like seals, they can’t explain why the torso cavities of a bison are so much bigger than a cheetahs, while a Tyrannosaurus tummy wasn’t proportionally tinier than that of a triceratops.

The answer may actually be rooted in respiration. While a big stomach can help fill a torso cavity, the structure of an animal’s lungs may make a difference as well. Mammals have lungs with a large surface area operating in a space sealed by the diaphragm. Muscles along the ribs expand and contract the torso, squeezing air in and out. Compared to the mechanisms driving bird or reptile respiration, mammals’ breathing may have required some particular organization of other organs, pushing the larger gut of plant-eaters into a more obvious configuration.