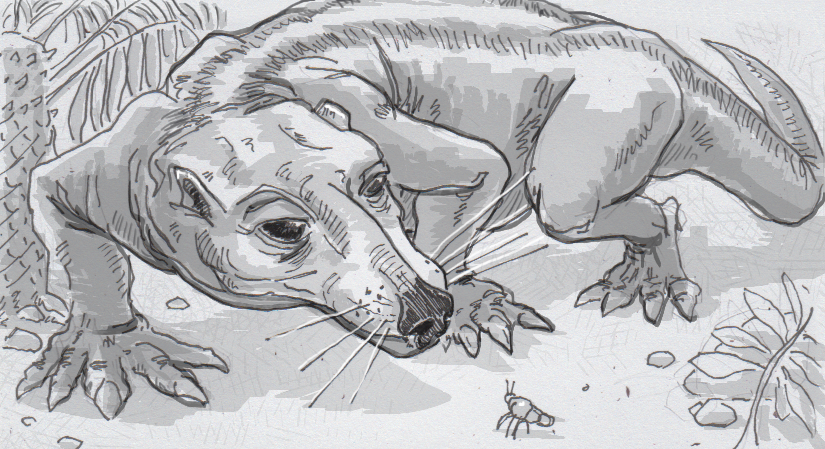 Thrinaxodon was a fox-sized creature that lived 250 million years ago, before dinosaurs even existed. The short creature walked with its limbs out to its sides like a lizard, which it likely used to dig the burrows it seems to have lived in. Scientists now believe the squat creatures also sported some of the world’s first whiskers, which it passed down to its eventual mammalian descendants, including you and the furrier creatures we see around the world today.

While we have some direct fossil evidence of mammalian hair from Spinolestes xenarthosus, scientists knew that that 125-million-year-old creature wasn’t the first critter to sport hair or whiskers. Finding delicate filaments that once covered a fossilized body isn’t easy though, so researchers from the University of Witwatersrand started looking inside some skulls instead. Employing X-ray micro-tomography (or CT scans,) they were able to get 3D models of the delicate structures inside a fossilized Thrinaxodon skull. They weren’t looking for whiskers directly, instead focusing on the nerves where whiskers would have attached.

Signs of a sensitive snout

Soft tissue like nerves obviously wasn’t available either, but our skulls show where the nerves once were. A channel for the trigeminal nerve runs from the brain case to the snout of all reptiles and mammals. In reptiles, the nerve reaches the very front of the face, where it then splits up to provide control and sensory information. In mammals, the trigeminal nerve only goes part way down the snout, where it then spreads out to reach lips, noses and of course, the sensitive whiskers that let mammals feel their way around the world. As suspected, our ancient, therapsid ancestor, Thrinaxodon, had space for a very modern-looking trigeminal nerve, indicating that whiskers had already started to evolve before the beginning of the Mesozoic era.

As paleontologists put together the evolutionary history of mammals, it seems that a lot of key features developed very early on, even before true mammals existed. While many aspects of mammals, such as night vision, have been assumed to be reactions to surviving alongside dinosaurs, Thrinaxodon’s whiskers point to some key genes, like MSX2, starting the transition to our furry, milk-producing order very early on.

Source: How the mouse outlived the giant by Univesity of the Witwatersrand, EurekAlert!