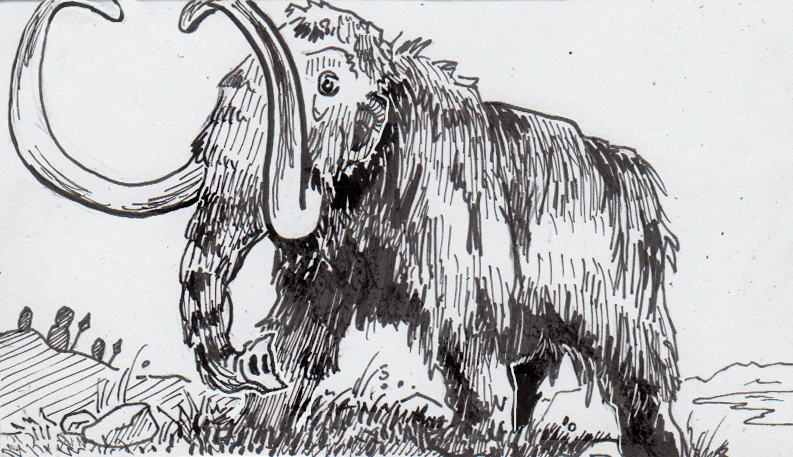 There are items in my freezer that I’m theoretically saving for later, but may never actually get around to eating before they’re frozen and frosted into an unappetizing lump of food. You may think this is just disorganization on my part, but I’m actually continuing an ancient tradition of Ice Age hunters, who would store their food in ponds for the winter, preserving it for later use (or leaving it there too long to be appetizing!) We know this because we’ve found their leftovers, most recently in the form of a nearly complete mammoth skeleton near Chelsea, Michigan.

The mammoth showed a number of signs of human involvement in its burial. While more thorough review and verification is still needed, small cutting tools were found nearby, accompanied by what will likely turn out to be incision marks in the animal’s bones. The arrangement of the bones may be the biggest clue though. Most of the skeleton was present, arranged with an unusual amount of order compared to usual patterns of decomposition, particularly along the spine where tendons usually stretch and contort bodies into s-shaped poses. Portions of the skeleton were also under large stones, presumably placed by humans to sink the corpse to the bottom of what had been a pond 12,000 years ago.

Sinking a body to the bottom of a pond was a surprisingly good substitute for my modern freezer, at least over the winter. Experiments have found that meat placed at the bottom a pond can be reclaimed in spring with just a bit of unsightly discoloration, with the bulk of the tissue remaining edible. This is due to the lack of oxygen, increased acidity and presence of lactobacilli bacteria. While lactobacilli forms a layer on the outside of the meat, it doesn’t really consume it. Instead, it ends up making the meat unappealing to to more destructive bacteria, ensuring Ice Age hunters could successfully recover their leftovers months after butchering their kill. Thankfully for us, these hunters never reclaimed this specimen, allowing us to learn more about life in the Ice Age. Maybe I can invoke such a benevolent claim the next time I want to skip cleaning out my old Tupperware.