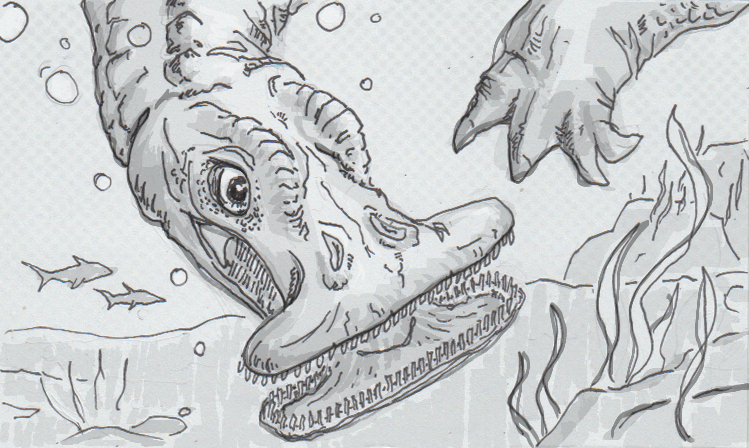 Sometimes even a decently preserved fossil will leave paleontologists wondering “so how does it, you know, work?” Such was the case with a specimen of Atopodentatus unicus discovered in 2014, which on the one hand gave a clearer picture of the animal’s anatomy than a previously discovered skull, but also led to some new questions about the marine reptile’s odd, hammer-shaped mouth.

While the research team is referring to A. unicus as having a “hammerhead,” that’s a bit misleading if it makes you picture a hammerhead shark. In this case, the crocodile-sized animal sports a rather square, flat skull, with a mouth that flares out to the right and left, almost like a thick, handlebar mustache composed of…mouth. The result is a maw that, at the front of the face, is wider than the rest of the skull. This mouth was filled with short, peg-like teeth around the “hammer,” with needle-like teeth clustered further back in the head. Once this strange anatomy was parsed, it still left the researchers reaching for the modeling clay to figure out what this mouth actually did for the animal.

Modeling the use of odd mandibles

Modeling and simulations are often conducted with computers for subtly and precision, but in this case the questions about A. unicus were so big clay was used as a way to quickly try out a variety of possible jaw configurations. With toothpick teeth, a plausible facsimile was eventually worked out, pointing to the animal being the world’s earliest known plant-eating marine reptile. The wide, flat mouth would have been effective at scraping plants off rocks along the ocean’s floor, almost like a wide rake. The finer-grained teeth at the back of the mouth could have allowed A. unicus to eject water out of its mouth, trapping the plants inside like a modern filter-feeding whale or shark.

Life bounced back to the bizarre

A. unicus‘ strange mouth is significant beyond just being fascinating to look at. The level of specialization in such a mouth also changes our understanding of how quickly life bounced back after the Permian-Triassic extinction event 252 million years ago. Previous to this, scientists had no reason believe that an animal with such a specific ecological niche would have had time to evolve just 10 million years after 96 percent of all sea life had gone extinct.

My first grader asked: Couldn’t this mouth be used for eating crustaceans or krill from the ocean’s floor, like a gray whale does?

The flat mouth does seem like it’d be good to pass over some flat, sandy patch to me, but the rest of the jaw is apparently suggestive of an herbivore. Apparently, other animals at the time were plant-eating filter-feeders, and they had some similar anatomy. Just without the bizarre chompers at the front.