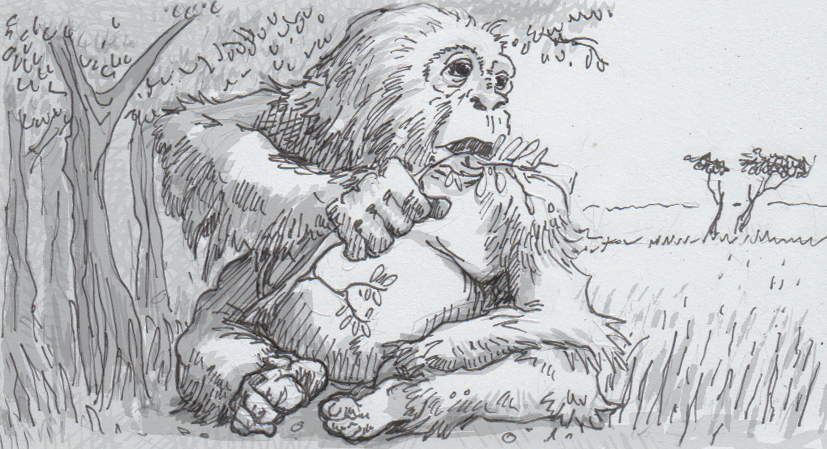 The legacy of the largest ape in Earth’s history has been reduced to the story of its teeth. While Gigantopithecus blacki is estimated to have been up to ten feet tall from head to toe, weighing between 500 to 1000 lbs., we’ve only ever found pieces of its teeth and lower jaw. Fortunately, the distinct morphology of teeth coupled with chemical analysis can tell us quite a bit about how this huge primate lived, and possibly how it died out.

G. blacki lived in Southeast Asia as recently as 100,000 years ago. With teeth having been found in China, Vietnam and India, we know that the ape and other related species roamed the forests there for over a million years. They don’t seem to have any direct descendants alive today, but the shape of their teeth and jaws indicate that orangutans are their closest living relative. However, the heft of G. blacki has raised doubts that it could have successfully lived in the trees like it’s smaller cousin. It likely also required much more food on a regular basis, which may have been critical to its extinction.

In examining the ecology of an animal, it’s obviously helpful to have as much anatomical data as possible. That said, teeth and jaws can offer a fair amount of insight, as their specialized forms directly reflect an animal’s diet. The thick jaws and robust, grinding teeth of G. blacki have led scientists to believe the large ape likely lived exclusively on plants. Chemical analysis of the teeth has recently revealed that they favored fruits, leaves and roots found only in the ancient forests, even though changes in the climate were at times expanding the grasslands in the region. While contemporaneous species have been confirmed to have lived on a mix of foods from both the savannas and the forest, the carbon isotopes found on G. blacki‘s teeth show they never ventured out of the woods.

This relatively limited diet might offer an explanation for G. blacki‘s extinction. As forests shrank, or at least became reduced to smaller patches of woods separated by grasslands, the large apes may have had a harder time finding sufficient amounts of their preferred food sources. While other animals were more flexible, and were thus able to traverse the grasslands as well, G. blacki may have trapped itself on smaller islands of forests. Eventually, populations may have been unable to intermingle, leading to population collapse. Despite anatomical similarities with modern orangutans, the modern apes have avoided this fate with their smaller size, more variable metabolism and more flexible diet.