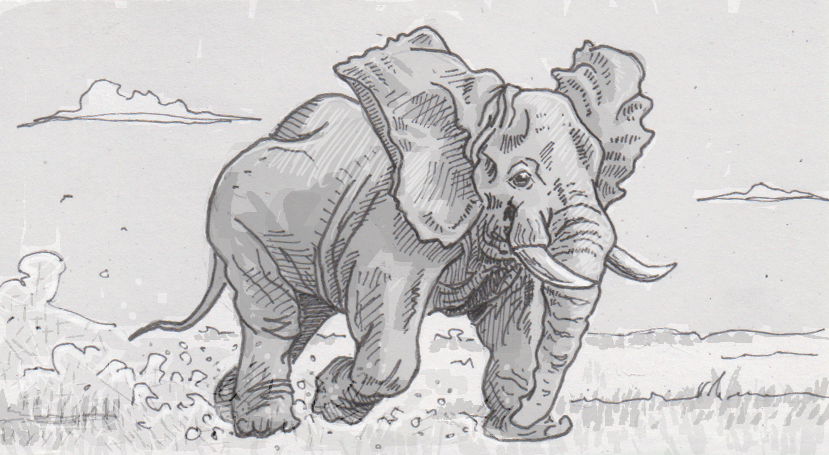 If video games have taught me anything, it’s that bigger characters hit harder, but move slower. This always felt pretty intuitive, to the point where giant characters in fantasy stories are depicted as moving in slow motion compared to human-sized folks. The thing is, movement is tied to our muscle strength, and that strength is (at least partially) due to muscle size, which would suggest that bigger creatures should move faster, not slower. Nobody’s seen an elephant run at 373 miles per hour though, so it looks like reality is siding with video games here, and we finally have the math to prove it.

Myriam Hirt, a zoologist from the German Center for Integrative Biodiversity Research, came up a formula to predict how size influences speed. The first factor is the animal’s mass, which not only dictates the amount of muscle available, but also the amount of inertia that animal has to overcome to start moving. So a large elephant may have some impressively large muscles, but it takes a lot more work to get those legs moving. This is different from weight, which is the influence of gravity on the body’s mass. If you moved an elephant to the Moon, it would weigh less, but still have a lot of inertia since the size of its body didn’t change. The upside of this is that if you did get an elephant moving that fast, it’d be remarkably difficult to then get all that mass to stop.

The second factor is the animal’s anaerobic metabolism, which explains why an elephant isn’t about to do that extra work to break into a swift sprint. Most of the time, a body relies on aerobic metabolism, which uses oxygen to provide energy to your cells, and is used in longer, lower-intensity activities like a long walk. For a quick burst of energy, like sprinting at top speed, muscles use anaerobic metabolism, which burns sugars like glucose directly. This allows for fast twitch activity in muscles, but produces byproducts like lactic acid, putting a cap on long muscles can work this hard. Taken together, the fastest elephants have only been observed hitting 25 miles per hour.

In the case of our charging elephant, overcoming the inertia of its mass requires too much anaerobic activity to work. The animal’s large muscles may give it a lot of strength and endurance, but not enough to rocket forward like a cheetah. In fact, across animals moving on land, sea and the air, the same size ratios held true 90 percent of the time. Like a bell curve, small bodies have little inertia to overcome, but lack the muscle to give them much power. Large bodies are too big to get moving before the muscles start to burn out. The sweet spot to maximize speed and size is then in the middle, around the size of a cheetah. Cheetahs have other adaptations that make their bodies even more efficient sprinters, like their super-flexible spines, but the size still matters. A double-sized cheetah wouldn’t be nearly as energy efficient and would like be unable to reach the same 74-mile-per-hour speeds.

This formula does more than confirm the speeds of animals we’re all familiar with. Thanks to it’s high accuracy, it can help us estimate the speed of animals we can’t observe, like dinosaurs. We’re estimating body mass in extinct animals as well, but baring other adaptions to improve performance, it’s fair to assume that a Velociraptor could have run at 34 miles per hour, in contrast to a much bulkier Tyrannosaurus would have only hit 17 miles per hour. Big bodies can provide a lot of power, but physics requires that they also take a lot of work to move around.

Source: Why the Biggest Animals Aren't the Fastest by Stephanie Pappas, Live Science