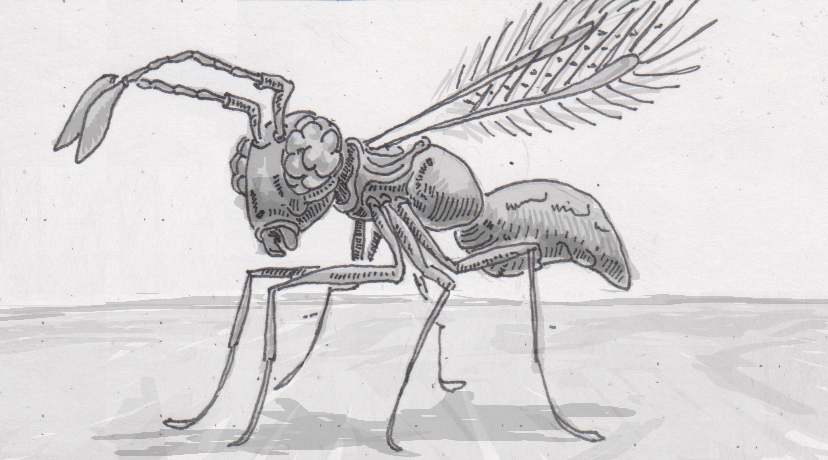 Measuring the anatomy of the most minuscule microinsects

In a world with tiny tardigrades, minute molluscs and shrimpy snails, it may seem like the only limit on how small an organism can be is the underlying size of a cell. Like all of these creatures, there’s more to it when you look closer, and scientists are studying the world’s more infinitesimal insects to see how nature scales down larger species. Many bugs used be bigger than we see them now, and some lineages seem to be evolving to be smaller and smaller. However, not every body part seems to shrink in exactly the same way.

There’s a whole range of so-called microinsects out there, and you’ve probably never noticed them. At the front of the line is Dicopomorpha echmepterygis, a member of the fairyfly family ( which means it’s actually a wasp). Their body length can be as small as 186 micrometers, which makes them close to the size of Roosevelt’s pupil on a dime. Surprisingly, even at that size they can pose a threat to other insects, as they lay their eggs inside other insects’ eggs so that the larvae can hatch and eat the host egg for it’s first meal. It’s not the most unusual strategy among wasps, but making it work does require special adaptations if you’re going to do anything at such a tiny size.

Researchers in the Lomonosov Moscow State University in Russia have been scanning and comparing the anatomy of microinsects like fairyflies to see how evolution has miniaturized different systems to cram them into such small exoskeletons. One of the more obvious changes is the shape of these insects’ wings- rather than the flat, blade-like shape you see on a house fly or dragonfly, fairyflies and their minuscule brethren have wings that look more like a single feather, with fluffy bristles protruding from a single movable vein.

Inside the body, researchers are learning that not all anatomy can be reduced equally. Organs and structures that help with metabolic activity, like the trachea or stomach, can apparently be scaled down without a problem. No matter how small the insect gets, those guts grow in equally small proportions. On the other hand, some anatomy can only get so small, as the tiniest insects end up carrying proportionally oversized reproductive and nervous systems. These organs may end up creating a bit of a “floor” for insect miniaturization unless evolution really changes up how the body functions.

Models for other miniaturization

While fairyflies and other microinsects are not the smallest organisms, or even smallest arthropods, on Earth, they’re a good model for scientists and engineers who want to build smaller devices, or even robots. We can look at the differences between larger and smaller species to see what accommodations were made to make specific moving parts smaller, hopefully providing a good analog for taking a larger robot and updating it’s design to be as tiny as a fairyfly.

Source: How evolutionary miniaturization in insects influences their organs by Vladimir Koryagin, Scienmag