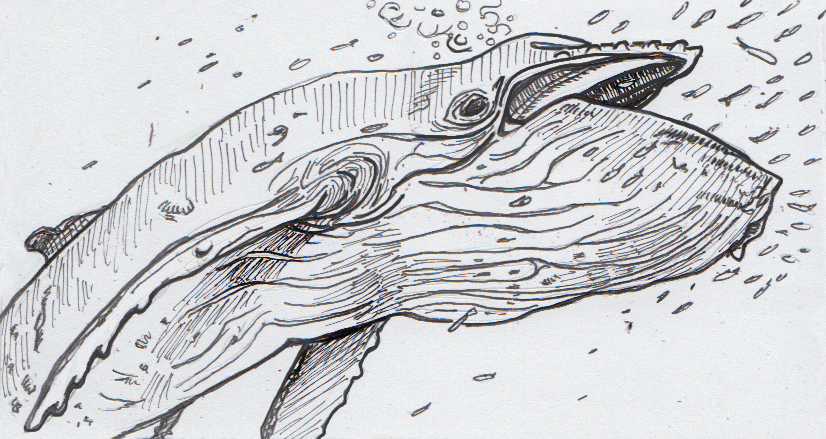 Measuring how filter-feeding whales manage their momentum at mealtime

If I’m stuffing my face, I’m rarely concerned that what I’m somehow doing is an inefficient use of my calories. If anything, the amount of say, pizza, that I can stuff in my face in a single sitting will be a caloric surplus. For an 66,000 pound animal like a humpback whale, this equation isn’t quite so obvious. Large, filter feeding whales may be able to take in enormous amounts of food in a single gulp, but they have to work very hard for every mouthful. Only recently did we have the sticky sensors necessary to figure out some of the finer details of whales’ big meals.

Concerns over feeding efficiency are shared by a variety of baleen-mouthed whales, but are most obviously demonstrated with blue whales (Balaenoptera musculus). When feeding, these massive animals accelerate to a top speed just under nine miles-per-hour. This might not seem like a lot of effort at first, but when you factor in just the whale’s 160-ton mass, swimming this fast works out to be around the same amount of momentum as an 11-ton school bus driving 54 miles-per-hour. The fact that the whale has to do this through water with its mouth creating drag like a giant, reversed parachute, and it’s easy to see why whales need to be thoughtful about each bite they take.

To finally figure out how these whales are managing their meals, scientists created tracking devices, complete with cameras, microphones, speedometers and crucially, suction-cups. The devices were suctioned onto feeding whales, and could precisely record how the whales moved in different feeding conditions. The answer proved to be two answers, as whales don’t approach every bite in the same way. For the most part, whales would open their mouths once swimming at top speed, then close them once they slow down.

Humpback whales (Megaptera novaeangliae) had varying techniques though, depending on what they were eating. When hunting krill, humpbacks would follow the above pattern, accelerating, opening mouth for a helping of food, then closing them again when they slowed down. When hunting small fish, however, humpbacks would change up their timing a bit, presumably to react to more evasive fish. It’s thought that the extra calories from the larger prey probably make up the lost efficiency, but probably not by huge margins. As big a bite as a large whale can take, there’s not that much room for error with an animal this big.

Whale feeding preferences are also being observed when it comes to location. While whales routinely travel huge distances around the world, 30 years of observations have found that they seem to return to their favorite haunts again and again, and then share those places with their families. Photo and genetic evidence found that a specific population of humpback whales has taught their calves about specific locations near Glacier Bay National Park. As with the feeding strategies, it seems that whales have some flexibility, but when they need to be able to operate in their ecological or biomechanical “sweet spots” to really thrive.