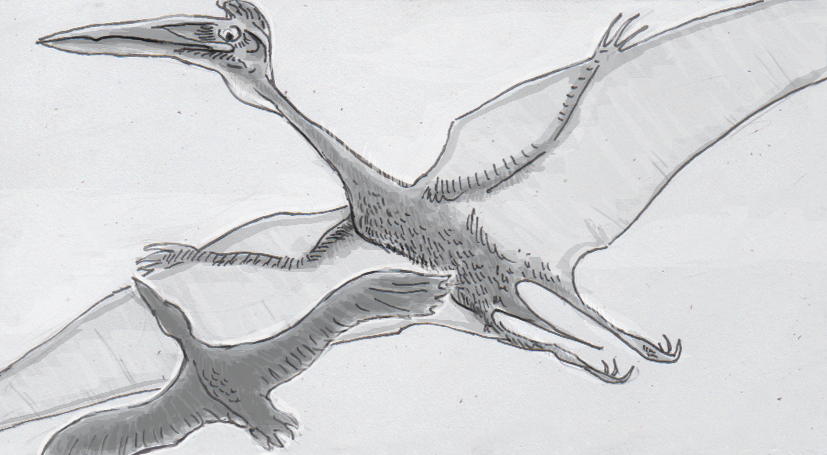 Measuring the mass of the world’s largest fossilized fliers

It’s easier to get off the ground when you’ve got less mass for gravity to pull on. This obvious concern is a limitation for human engineers making aircraft or rocket ships, but also for animals that have evolved to fly for their safety, their food, or both. For many flying creatures we encounter these days, the bulk of one’s body isn’t a huge concern (with some exceptions,) but fossils of some ancient birds and pterosaurs are so big that paleontologists have been sometimes doubting if they’d ever be able to become airborne. Figuring this out has been difficult, partly because we’re still figuring out just how big some of these creatures were in the first place.

Part of the issue at hand here is how bodies scale up. Creatures that are twice as big as small cousins generally can’t retain the same proportions, as their limbs are thicker, heavier, but generally stronger. This works well enough if you’re walking around like an elephant, but for fliers that extra bulk along one’s wings can be a deal breaker. To help shed any excess weight possible, birds have evolved air sacs in their bones, which trades bone for empty air pockets throughout the skeleton. This not only reduces the load of a limb or skull, but also allows for better respiration, which is a huge help when engaging in energy-intensive activities like flight. It’s also been found to allow arm bones to get thicker without being heavier, which is good because thinner bones don’t stand up to the stress of flapping wings very well.

A creature that may have tested the limits of these adaptations was Pelagornis sandersi, who had wings between 20 to 24 feet across. Remarkably, estimates put the birds’ body weight at only 88 pounds, which was likely critical to its flight. The low mass-to-wing ratio may have been how the bird was able to soar over the oceans, catching seafood with the “psuedo-teeth” built into its beak. Take-offs and landings are still a point of confusion for a creature this size, but it likely followed the model of the albatross and frigatebirds, whom use the warm updrafts off the ocean’s surface to help stay in the air without needing to flap their huge wings too often, saving energy as well as wear and tear.

Questions of flight get more complicated moving farther back in time though. The biggest flying animal we know of was the Cretaceous period pterosaur,  Quetzalcoatlus northropi. Q. northropi is estimated to have had a wing span up to 32 feet across, but calculating its mass has been a much more difficult job. Pterosaurs employed the concept of air sacs in their skeletons like birds, which was good for their weight but terrible for surviving as fossils. The incomplete skeletons have often been compared to birds, even though they’re very distantly related, and body mass estimates have ranged from 165 pound to a whopping 1,199 pounds. Air sacs may have been a great innovation in biological flight, but that’s a lot of bulk to get into the air.

To try to get a better handle on what large pterosaurs were capable of, paleontologist Elizabeth Martin-Silverstone built 3d models and simulations based on CT scans and x-rays of existing fossils. She then used those detailed structural measurements to calculate some of the biomechanics of being a large flying animal, looking to see if there was a point where physics simply made flight impossible. Armed with that data, it was calculated that a large pterosaur could probably generate sufficient lift for flight just by catapulting themselves off the ground with their arms (which did pack a lot of power, despite their relatively thin appearance in restorations.) Pterosaur bones were also found to be a bit heavier than their analogous anatomy in birds, emphasizing that birds weren’t really weren’t a great model for comparison overall. With that in mind, a new estimate for Q. northropi‘s mass was calculated based on its body’s mass and volume, putting the animal at a relatively moderate 551 pounds.

This doesn’t fully explain everything about how big pterosaurs flew, but it supports the idea that they weren’t using those wings just for walking.

Source: Pterosaurs should have been too big to fly – so how did they manage it? by Elizabeth Martin-Silverstone, The Conversation