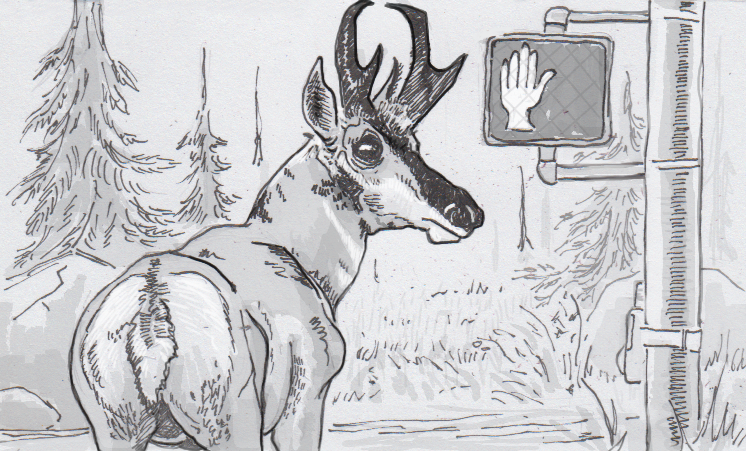 Measuring the success of dedicated pronghorn and mule deer crossings

While it seems like most humans can learn to use a crosswalk successfully, nobody expects a mule deer to figure out how to look for a “Walk” signal near a busy road. Instead, people have been constructing animal road crossings, either as overpasses or underpasses, at points where wildlife needs to get across a busy stretch of road. Depending on the fauna in question, these structures can be relatively small, or massive bridges over many lanes of traffic. The obvious benefits are that fewer animals and humans are killed and injured in collisions, but newer projects are also gathering data on wildlife behavior as well.

The first road crossings were built in France in the 1950s, quickly spreading across Europe. As their utility gets proven again and again, they’ve continued to spread around the world, with over 600 structures in the United States alone. The largest overpass in the US is now being planned to allow wildlife to cross the US 101 Freeway, which is something I don’t don’t even look forward to in a car. Data suggest that investment is worth it, with construction costs often being offset by a reduction in car accidents very quickly after completion.

While no two environments are identical, crossings in Wyoming have provided some excellent reference points. US 191 is a road frequented by tourists going to the Grand Teton and Yellowstone National Parks, and are understandably close to the ranges of both mule deer and pronghorn antelopes. In 2012, the Wyoming Department of Transportation opened both overpasses and underpasses for these animals, each monitored with cameras to better understand how much the animals were actually using these structures. These numbers were compared to the number of collisions in the area, and immediately labeled a success. In the span of three years, 40,251 mule deer have used the crossings, reducing traffic accidents by 79 percent, and 19,290 pronghorn have gone over the highway, avoiding accidents altogether.

Aside from the fantastic reduction in injuries and deaths, these cameras revealed behavioral trends in these populations as well. The mule deer (Odocoileus hemionus) most often used one of the six underpasses, while pronghorn (Antilocapra americana) showed a strong preference for overpasses, even though there were only two available. This fits with hypothesis about pronghorns’ reliance on vision to avoid predators, as the overpass would allow them a better view of the surrounding area and probably feel safer than an enclosed tunnel. This suggests that while overpasses are more expensive, certain species really appreciate the effort, and might make it up to us by staying off the road entirely.

While the road crossings’ designs didn’t need much adjustment to serve the intended ungulate populations, they did need some tweaks thanks to behaviors of humans. Berms intended to keep animals from gawking at cars proved irresistible to ATV drivers, requiring regulation that humans not use the area as a playground. Hunters have also taken advantage of the geographical bottleneck, prompting new rules banning hunting near overpasses so that the animals don’t get scared away from them, or panic at a gunshot and spill into the roadway. Just like with Walk signals, animal predators aren’t expected to read such signage.