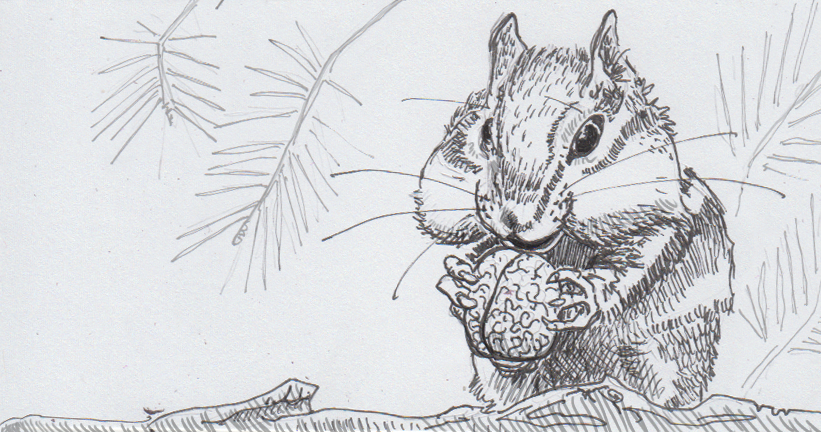 Plenty of animals eat other animals, sometimes all at once. Many carnivores aren’t terribly picky about gobbling up prey in large chunks, even if they have to somehow spit up the undigested bits later. We’re much more likely to raise an eyebrow at pickier carnivores, such as the monsters who would specifically target their prey’s brains over thigh or breast meat. The list isn’t huge, but there are certainly some repulsive, horrifying brain eaters out there, starting with cute little chipmunks.

Chipmunks are actually omnivores, despite their frequent depictions as harmless nut-collectors. Along with other related squirrels, these rodents are quite happy to eat anything they can get a hold of, from bugs to roadkill to bird eggs. The latter is a fairly important source of nutrition, as the small, fuzzy mammals targeting bird nests to get a hold of eggs or young chicks. While some kind of meat is likely to turn up in 75 percent of chipmunk stomachs at any given moment, it’s still a bit striking when they are seen eating brains then discarding the rest of the body. This isn’t the most common feeding habit, but it’s been documented on more than one occasion indicating that chipmunks do find brains to be particularly enticing.

The Lumholtz’s tree-kangaroo (Dendrolagus lumholtzi) is a small native of Australia with a long tail and body that looks like a weasel with the thicker hind legs of a kangaroo. The dexterous animals normally live on ferns, fruits and leaves, fermenting their food in their foregut as the first step of digestion. This specialized process seems like it should be fairly limiting to the marsupials’ diet, but D. lumholtzi in captivity have shown a disturbing amount of flexibility with their vegetarianism. When given the opportunity, the tree-kangaroos have been seen eating the brains of captured doves and Australian Brush Turkeys. It’s not clear if this is a dietary need that researchers just haven’t observed in the wild yet, or if these animals were somehow reacting to stress from living in captivity.

The most familiar brain-eating mammals are probably humans. Even ignoring zombie folklore or small cannibalistic tribes in Papua New Guinea, humans will make a point of eating the brains of their prey, sometimes in tacos. Now, this brain eating differs from say, the chipmunks, who seemed to eat the brain of a mouse before discarding the rest of the body. Usually human brain eating is the result of making the most of a food source, with brains being prepared from animals already being raised for their meat. Cows, goats and other common livestock are worldwide favorites, and can offer a fair amount of nutrients per ounce, with high amounts of DHA oils in particular (the latter helping grow healthy brains, of course.)

Eating brains does carry some risk though. Contaminated brains can transmit various prion diseases, which lead to lesions in brain tissue thanks to misfolded proteins. To of the most famous examples are mad cow disease, tied to feeding ground beef to cows, and kuru, which was rife among the Fore people of Papua New Guinea, at least for a while.