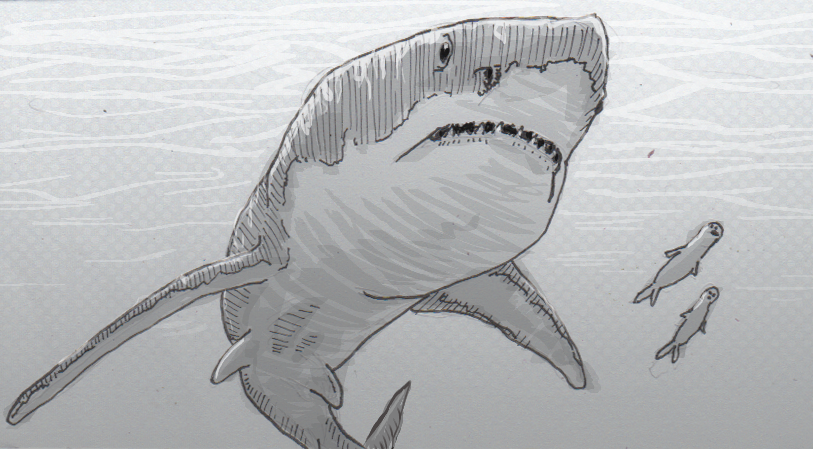 What do you eat when your mouth can theoretically handle just about anything it can find? This question isn’t just a reaction to some deeply-rooted survival instinct, or our collective imagination’s fascination with monstrous creatures, because understanding what top predators ate can also reveal a lot about the ecosystems them live in. In the case of extinct predators, like the giant shark Carcharocles megalodon, focusing on their predation is exciting, informative and one of our only options, since cartilaginous fish like sharks don’t leave behind many fossils besides their teeth. Fortunately, some well preserved teeth are a good starting point for piecing together these sharks’ habitat from 23 million years ago.

A recent study from Pisa University looked not only at C. megalodon‘s teeth, but also at trace fossils where those teeth were used. More simply, paleontologists looked at other fossils for bite marks that matched the shark’s teeth as a way to figure out what the shark was eating. Since those teeth could grow up to seven inches long with robust serrations, they left a bit of a signature in the animals they bit, particularly in harder shells or bones. While not as conclusive as finding actual fossilized stomach contents in a shark, researchers were reasonably certain that the marks they found couldn’t have come from any other predator.

The surprise was that the bones that appear to have been chomped by a 60-foot-long shark didn’t come from larger animals themselves. Instead of other giants, C. megalodons from 7 million years ago seem to have been eating dwarf baleen whales and seals. Those animals generally grew to a maximum of 12 feet in length, which seems like easy but small targets for such large sharks. Eating these relatively small mammals probably wasn’t a temporary compromise or anomaly though. When many of the prey species went extinct around 2.3 million years ago, C. megalodon quickly followed, possibly unable to find a substitute food source before it was too late.

Source: Bite Marks On Bones Reveal The Tastes Of The Largest Shark Ever by Shaena Montanari, Forbes