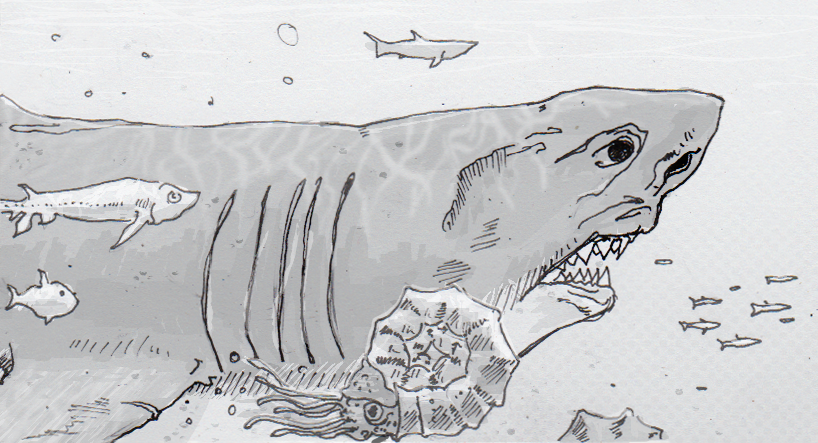 Megalodon, massive sharks and the teeth we love to fear

Predators, especially the large ones, are pretty exciting. From Tyrannosaurus Rex to Great White sharks, we’re awestruck (and possibly a little fearful) of any giant thing loaded with teeth or claws that would theoretically like to eat us. So it’s no surprise that a giant, extinct shark, like Carcharocles megalodon, is so good at capturing the imagination (sometimes to a fault, if you consider the Discovery Channel’s dishonest Monster Shark shows.) Aside from the “that’s a lot of giant teeth!” factor, our understanding of these marine predators is largely speculative.

Appropriately, most of what we know about these extinct sharks stems from their teeth. These teeth were large enough that when they were first encountered hundreds of years ago, they were assumed to be stone tongues from dragons or snakes. That’s obviously been corrected, and from there researchers have tried to reverse engineer the shark’s jaw, bite force and body, with help from comparisons modern great white sharks. Throw in the few vertebrae and coprolites, and we can now estimate that these creatures had heavy jaws, lived all around the world, and at 50 feet long, dined largely on prehistoric whales.

It’s thought that some of the reason for these large sizes were so that Megalodon and other large predators could diversify their diet. If you’re big enough to eat a whale, you can probably get away with eating just about anything else you come upon, giving you more options. However, this large size may also be tied to Megalodon’s extinction. When global temperatures went down in the Miocene period, the was a also a decrease in the amount of ocean that could support a predator of that size.

Giant sharks beyond the giant mouths

While lots of our fascination with sharks is connected to their hunting and digestion, that’s not the reason we’ve built so much of our model of these creatures around their digestive tracts. As with all cartilaginous fish, shark skeletons generally aren’t solid enough to fossilize like your dinosaur or marine reptile. This leaves us with the harder teeth, plus the occasional vertebrae.

Another large shark from the Cretaceous period was recently found in Texas. Three vertebrae indicate that the Leptostyrax macrorhiza would have been around 20 – 30 feet long, although the all important question of tooth-size cant’ be answered yet, as none were found with the back bones. So we can’t say for sure if this super shark would have been an appropriate side-kick for our favorite Megalodon, or if it was a precursor to the largest shark alive today, the small-toothed whale shark, who lives on plankton instead of whales. I’m sure the Discovery Channel is hoping for the former option.