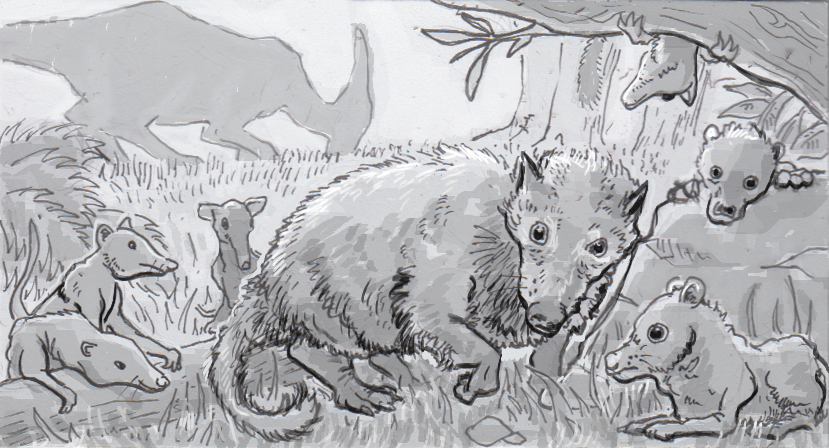 For a long time, one of the supposed silver linings of the extinction event that ended the Mesozoic era was that it allowed mammals, like us, to rise to greater prominence than was possible in the shadow of dinosaurs. While dinosaurs from Ceolophysis to Tyrannosaurus rex wandered the Earth, mammals were supposedly trapped in an evolutionary pocket, hanging on only as a series of shrew-like animals eating bugs under the cover of night. Now paleontologists are taking another look at this narrative, as more and more mammal fossils are being found, representing a wider array of animals than we thought possible. While the asteroid impact 65 million years ago did reshape life on Earth, it may have been harder on mammals than we previously appreciated.

One of the big metrics to gauge how a group of animals is doing is to look at genetic diversity. When looking at fossils, this often means looking for how many different species exist, and how many ecological niches they occupy. So if every mammal over the entire age of dinosaurs was a tiny, bug eating rodent-sized creature, they could be considered to be a fairly homogeneous group. If something went wrong for that niche, like a food source disappeared, it would mean that the entire lineage could quickly be in jeopardy. More recent studies of Mesozoic mammals have found that this isn’t actually the case though— mammals seemed to be diversifying in a number of ways, even though there were still plenty of giant dinosaurs around.

By the end of the Cretaceous period, hoofed ungulates like Kharmerungulatum vanvaleni and the dog-sized Repenomamus were breaking the mold on the rodent-body template a bit, but the real case for diversification is made with these animals’ teeth. The variety of tooth shapes indicate that mammals were eating a lot more than just insects, with teeth and jaws that seem to have been specialized for grazing or eating flesh. Some of this growth may have been tied to the evolution of flowering plants, which offered new food sources in the form of seeds, fruits and potentially tasty pollinators.

This rise in diversity was then impacted by the Chicxulub asteroid as well. While a lack of triceratops may have left room in the ecosystem for larger mammals, some of these Cretaceous mammals didn’t survive long enough to find out. While there was eventually an increase in diversity among mammals, their numbers seem to have suffered at the end of the Mesozoic era like their dinosaur neighbors. Like the dinosaurs at that time, the more specialized mammals likely suffered most after the asteroid hit the Earth, with the more generalized species being the ones to carry on for whatever silver lining could be found at the start of the Paleogene era.

Source: Mammals began their takeover long before the death of the dinosaurs, Scienmag