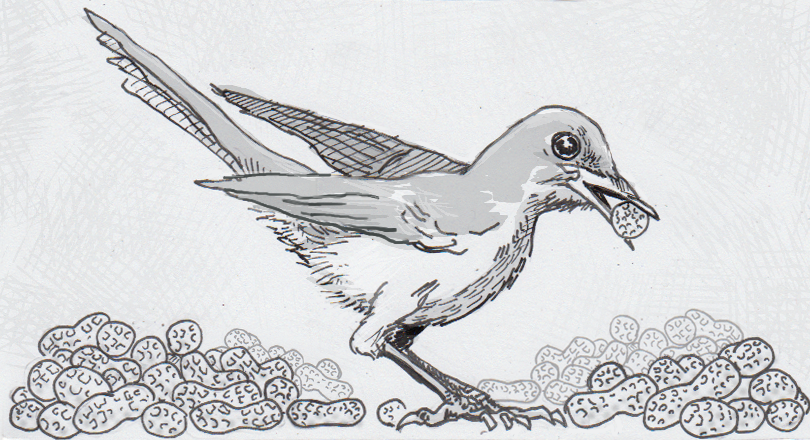 Mexican Jays found to be pros at picking their peanuts

In my local environment, efficiently acquiring food usually means something like picking the shortest line at the grocery store, or maybe eating my leftovers out of the same container they were stored in. Most other animals have slightly smaller margins to work with, because picking the wrong food source, or spending too much time looking for food, can have big consequences. Fortunately, an animal like the Mexican Jay (Aphelocoma wollweberi) has some pretty sharp methods to quickly discover and select their food, even when some subterfuge is at play.

When presented with food like peanuts, the jays have a small but important issue to consider. While the meat of the nut is nutritious, not all nuts are equal. More importantly, it’s not obvious which peanut is worth the time and trouble to open, because the shell’s size doesn’t always match the meat.  The birds don’t seem to stuggle with this though, and are great at picking out only the nuts worth cracking open to eat.

Weeding out the weak or weird peanuts

The selection process was tested with a number of modified, misleading peanuts. In some cases, visually similar shells were artificially weighted, while others were emptied. The jays consistently picked the heavier nuts, indicating that they knew that a light shell meant light eating. Further testing looked at scenarios where the weight of the nuts was about the same. In one case, three-pod nuts had two pods removed, so that they would weigh the same as the second option, which were naturally single-pod nuts. In this case, while the modified peanuts were larger (with the larger shell), they were rejected, as the birds seemed to know that something was “off” with those choices. They then preferred the peanuts where the weight better matched the outer appearance.

Using high-speed cameras to capture the jays’ movements, researchers found that after the bird picked a peanut, they’d give it some quick, tiny shakes. This gives them a sense of the weight of the nut. The birds also opened and closed their beaks on the peanut, which may give them some sort of auditory feedback about if there’s empty space inside that shell or not. Both of these tests can of course be performed quickly enough that the jay barely expends any time before being able to start its lunch or move on to the next option.