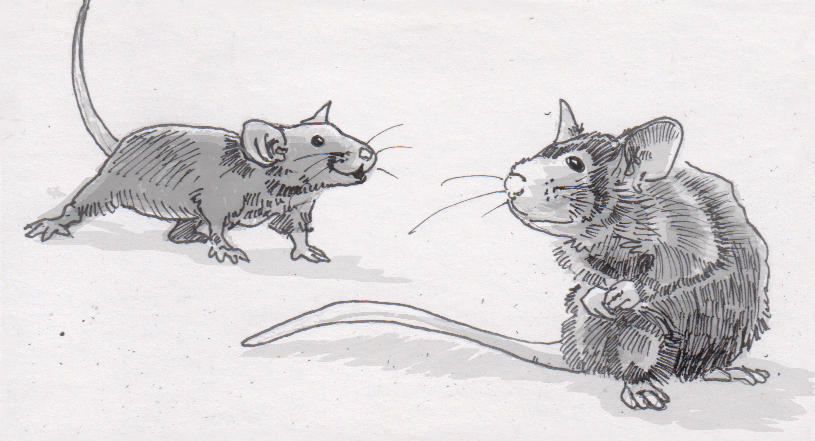 Mice adjust their ultrasonic singing according to their expected audience

Greeting cards and image macros may extol the virtues of “singing like nobody is listening,” but wild house mice would suggest a different strategy. The mice seem to carefully consider their audience, and will even alter their vocalizations depending on the sex of their listeners. It’s one more wrinkle in the increasingly sophisticated world of singing, courting mice.

Wild mice are adept singers, capable of many skills we normally associate with songbirds. While our ears only pick up generic squeaks, mice listening to ultrasonic frequencies outside our hearing range get to hear songs with repeated phrases and rhythms. Male mice also seem to have distinct signatures to their songs, as females have been observed discriminating between songs sung by siblings of familiar mice versus total strangers. All these songs seem to have an aspect of courtship to them, as males are often inspired to sing when catching the scent of a female mouse (or her urine). However, the latest analysis of these vocalizations found that they’re probably more sophisticated than simple pick-up lines.

While male mice definitely croon for females, they’ll vocalize for males as well, but not with the exact same song. Recordings of 20 male and 20 female mice found that both male and female mice make small changes in how they vocalize according to who they’re singing to. Males singing to females shift the pitch of their song to a higher frequency, whereas male audiences get an emphasis on volume. Females also get squeakier when vocalizing for males, but don’t bother getting louder for a female listener. If that weren’t enough to to keep track of, both sexes increase their rate of vocalization for the opposite sex, allowing things to slow down with their peers.

Missing the songs among the squeaks

Despite all the mice living in laboratories around the world, scientists have only been studying mouse songs since around 2012, so there’s plenty more nuance to figure out. Even with all these sophisticated patterns and variations, mouse song is performed in the ultrasonic sound spectrum, meaning it’s too high-pitched for our ears to hear. All of the above analysis was done with spectrographic recording tools, not human ears. What’s more, lab mice, which are specially bred to be genetically consistent for medical and biological tests, don’t sing the same way wild house mice do. It’s suspected that the generations of inbreeding to keep lab mice consistent may have erased their ability, or at least motivation, to sing to each other. This may also be tied to why females discriminate between the songs of related and unrelated males— they have an instinct to preserve the same genetic diversity that lets these rodents serenade each other in the first place.

Source: House mice may modulate their vocalizations depending on the sex of the receiver, Phys.org