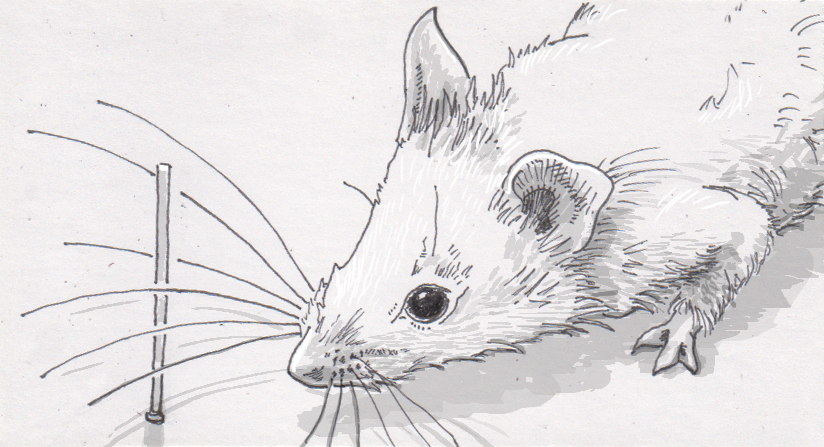 Mice map their world by scanning space with their whiskers

You’ve probably never tried to navigate through a dark room by bumping your face into things. At least not on purpose. Instead, you most likely extended your arms slightly, so that your fingertips could gently come in contact with objects as you walked along. With each bump or poke, you not only felt contact in a specific finger, but you also started building a conceptual map of the room. This somewhat clunky process may be just good enough to get you to the bathroom in the middle of the night, but it’s hugely important for an animal like a mouse. So much so that they even do it with their face.

Not every part of a mouse’s face is that useful for crawling through dark nooks and crannies though. Their eye’s aren’t great at focusing on objects close to their head, which means that a lot of information is needed from the mouse’s 24 whiskers along its snout. While lots of mammals rely on whiskers to help sense their local environment, researchers have found that the way mouse brains use that information goes beyond what your average cat or dog will do. Instead of just perceiving contact from a specific whisker, that input also triggers special structures in the mouse’s somatosensory cortex called barrel columns, which go on to start building mental maps of the mouse’s environment.

Researchers were able to watch this activity in multiple layers of a living mouse’s brain at once. Brain cells were cultured to be fluorescent when active, revealing a few stages of activity when a mouse brushed by a small stimulus on one side of it’s head. One layer of the cortex seemed to only keep track of which whisker felt something, much like you know which finger touches something when you can’t see it. The other layers took the movement of the whiskers as if they were scanning the space around that stimulus— even the empty space was providing some feedback, beyond the moment of contact. Humans scan spaces to build mental maps too, but most of our input comes from visual information. For a mouse crawling in the dark, the whiskers seem to be the more reliable source of data.

The next step is to see how much detail mice can really get from their scanning whiskers. Can they recognize specific objects? How is that information processed so that further actions, like hiding or pouncing, take place? The complete picture won’t just help with understanding how cool mouse faces are, but also to build a model of this kind of brain activity in all mammals. We know that our hands can do some to the work these whiskers take on, so seeing what a mouse brain “sees” may provide insight on human brain activity too.

Source: A mouse’s view of the world, seen through its whiskers by Robert Sanders, Berkeley News