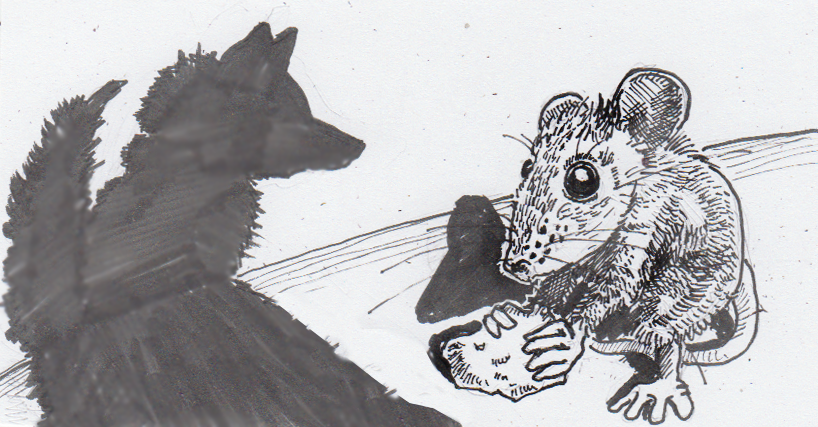 Fear, as one of our most basic motivations, can be very powerful. Ideally, fear helps us avoid danger or harm, but it can also effectively disable our thinking, causing us to panic. While it might seem that evading immediate injury would override all other impulses, a study with hungry mice found that they were willing to risk life and limb if it meant getting a snack. While nobody wants to be eaten by a predator, it looks like we might consider the risk if it means we get to eat too.

Hunger all in their heads

The most basic way to test the motivational power of hunger is to simply deny food to a test subject for 24 hours. For more precise control though, researchers used optogenetics to make their mice hungry on demand. Optogenetics is a technique that allows for genetically engineered brain cells to be manipulated by light delivered through implanted fiber-optics. Nerve cells in the mice’s hypothalamus that produce AgRP, a molecule that influences appetite, were triggered so that nutritionally sound animals could suddenly feel like they hadn’t eaten in some time.

The hungry mice were then offered food in areas that would normally trigger strong fear responses. One option smelled like foxes, insinuating the immediate presence of the predators, while the other had food in an exposed, open area that would leave the mouse nowhere to hide if it approached the snack. The mice seemed to find the risk of death reasonable though, as they all spent more time in supposed “danger” than sated mice dared. As follow-ups, hungry mice were presented with a batch of other options, including food versus companionship, or in artificially hungry and thirsty mice, food versus water. In every case, food won out.

At this point, researchers don’t have a full explanation for how the mice behaved. A starving body carries a guaranteed risk of mortality, so it’s likely that these priorities have been crafted by evolution for good reason. In this case though, researchers are more interested in identifying the exact neural activity that allows one part of the brain to override other impulses. It’s likely that these relationships are dynamic depending on a mouse’s specific circumstance (as my second grader put it, “what if the food looked just like a fox? Would the mouse still come get it?”) but there should be a reliable mechanism in the brain once a personal threshold for ice cream over injury is reached.

My second grader asked: Would the mice’s tummies growl when their brains thought they were hungry?

Probably not. Borborygmi, the growling noises from your stomach and intestines, occur on their own timescale as your digestive tract prepares for its next meal. The regular muscle contractions help clear food, mucus and bacteria to avoid build-up in any single location, and so are at work to some degree all day long. We associate those sounds with hunger mainly because empty stomachs ready for more food basically resonate louder, and so that’s when it catches our attention. The mice in this study probably didn’t notice their absence though.