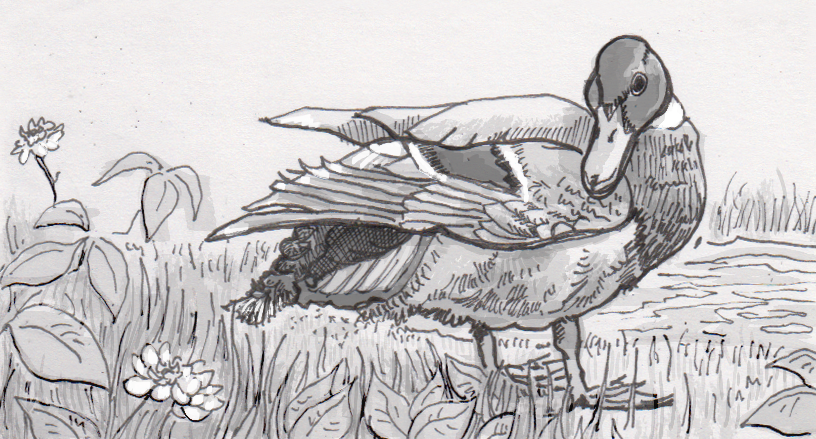 A nearby park has become home to over a growing number of both domesticated and mallard ducks. At busier times, it almost seems like the shores of the two artificial ponds are completely lined with ducks. This naturally means that the plants and paths nearby end up nearly completely covered in poop, to the point where my four-year-old is looks like he’s playing hop-scotch to avoid stepping in it. Soiled shoes aside, the poop from the mallards in particular may be making an important impact on the ecology of the park. Since those birds migrate from other locales, they’re likely bringing seeds and spores with them, although scientists are only just starting to measure how much of an impact their poop might make.

The duck poop at my local park wasn’t tested, but a more extensive study was recently completed that looked specifically at mallard (Anas platyrhynchos) migration in central and eastern Europe. Even ignoring the larger seasonal migrations these ducks make each year, a mallard may fly as far as 12 miles in 30 minutes, giving them ample opportunity to disperse seeds around an ecosystem. Scientists knew that seeds may sometimes get stuck to the birds’ wings or feet, but this was the first serious look at ducks’ endozoochory, or seed and spore dispersal, as a product of their digestive tracts. Basically, the question was how many seeds are these birds eating and indirectly planting in new places?

The 200 fecal samples collected in the wetlands of Hungary showed a fair amount of diversity. 21 species of flowering plants were found, including 13 that were terrestrial enough to grow outside a pond. More unusually, the duck poop was also turned up with spores from the watermoss Salvinia natans. This adds mallards to the short list of animals like deer, mice and fruit bats, that was previously known to help spread ferns across large distances. So while most expectations about seed and spore dispersal point to frugivores, or fruit-eaters, it turns out that the common mallard may also be shaping ecosystems around the world.

How significant are these seeds?

The full extent of the ducks’ poop isn’t known yet. While they clearly carried a number of plants seeds in their stomachs, the most frequently found seed was for the fig Ficus carcica, and none of those seeds seemed to actually germinate in their new Hungarian home. This is probably good news, as some less-welcome seeds were discovered as well. The hackberry tree is normally found in North America, and while only one such seed was found in this sample, it would likely function as an invasive species around the wetlands of Hungary. The combination of both diversity and unpredictable germination suggests that we really need to find out more about what these ducks are depositing around or ponds, parks and paths.