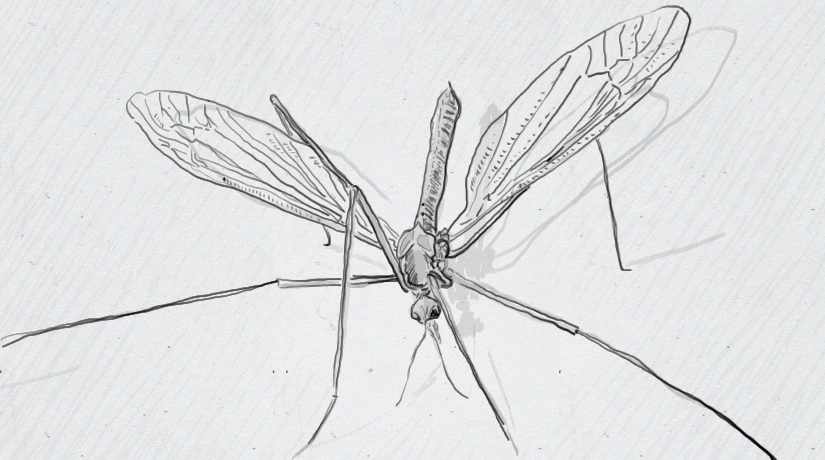 I’ve recently found out that I’ve been lying to my kids. During the summers, we’d occasionally find what looked a bit like an oversized mosquito in or around our house. I was correct that it wasn’t something we needed to worry about, but no, it wasn’t a mosquito hawk. It didn’t eat mosquitoes. It was a crane fly, and eating much of anything wasn’t on its to-do list, because most of them lack functional mouths.

While there are 15,000 species of crane flies making up the family Tipulidae, they’ve managed to remain fairly mysterious to most people. In addition to the “mosquito hawk” misnomer, they’re sometimes called “daddy long-legs,” thanks to their thin but long legs, sometimes reaching as far as 10 inches across. They’re not all that big though, as a family that large allows for variations so small that they could perch entirely on their larger brethren’s heads. They usually have long narrow wings and slender bodies to match a scaled-up mosquito, but they critically lack the harpooning proboscis of a real mosquito, as the adult crane fly we encounter doesn’t need to eat. It’s only task in life is mating, which it has to accomplish in two to three days before it dies.

Life before legs or wings

Most of a crane fly’s life is actually spent as a larva, looking much more like a worm in moist soil or rotting logs. The larvae also exhibit a fair amount of variation, with some species equipped with hooked prolegs while others rely on setae to help move through water. In this phase of their life, the crane flies gorge themselves on plants, and can become a problem for farmers if they damage crops’ roots too much. Generalizations about their ecology is tricky though, because for all the adult crane flies that have been discovered, researchers haven’t been able find and categorize all the matching larvae. It’s one of a few holes in our knowledge concerning these abundant insects.

While entomologists are confident about adult crane flies lacking mouth parts capable of biting anything, there have been reports of some species showing interest in nectar. More often, the adult flies are observed participating in what we assume is different versions of courtship. This can look like swarming in the air, or a group of males hopping up and down just off the ground at a particular location. They’re sometimes seen hanging from spiderwebs, just above water, although that seems like an even more confusing location to find a date. We know they have large eyes, but we’re not sure how much they rely on their eyesight navigate the world, which might make sense with some species showing an interest in congregating in dark places.

Until more questions are answered, at least I’m sure the kids don’t need to worry.

My first grader asked: So what bugs do eat mosquitoes?

Dragonflies will gobble mosquitoes, properly earning them the nickname “mosquito hawks.” Damselfy larvae will eat mosquito larvae if they find them underwater. Mosquito larvae and pupae are also at risk of being eaten by diving beetles and water scavenger beetles. Best of all, mosquitoes in the Toxorhynchites genus will eat their more annoying kin as in their larval stage.

Outside of insects, mosquitoes can be kept in check by spiders, turtles, frogs, fish, birds and bats.

Source: Mosquito Hawk? Skeeter Eater? Giant Mosquito? No, No, and No by Leslie Mertz, Entomology Today