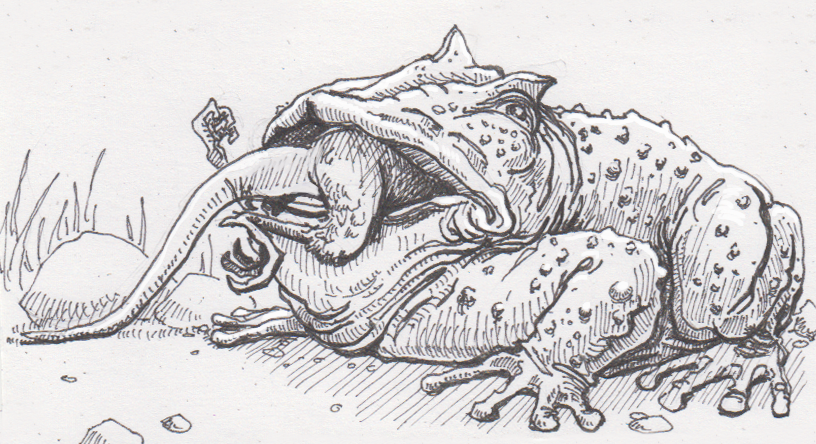 Every kid knows that frogs eat bugs, overlooking the fact that many species also put fish, snakes, rodents and even other frogs on their menu as well. That list got some interesting additions lately, with a prehistoric frog species, Beelzebufo ampinga, being found capable of consuming small dinosaurs. Nobody today has had the privilege of being bitten by these ten-pound amphibians, but analysis of some of their surviving relatives suggests that the so-called “devil frogs” may have had a stronger bite than a German Shepard.

The study started with much smaller, safer mouths. South American horned frogs in the genus Ceratophrys are the current big bite kings among frogs, although they they don’t grow nearly as large as their extinct counterparts. Instead of relying on the typical, and amazing, tongue-snare techniques other frogs use to capture small prey, Ceratophrys are ambush hunters that wait to surprise and gobble up animals nearly the same size as themselves. When measured with a device called a force transducer, the a frog with a mouth under two inches could bite with around six-and-a-half pounds of force. That’s not enough to even break your pinky, but it’s not bad for such a tiny creature.

From the initial measurement of a daintier Ceratophrys frog, researchers then calculated what a bigger set of the same jaws could do. Strength is dependent on muscle and bone size, so scaling up a Ceratophrys mouth quickly makes for a more impressive bite. With a four-inch mouth, a Ceratophrys bite becomes comparable to a toad-headed turtle, although your finger bones might still survive a single chomp. Taking these calculations further, B. ampinga was even larger, and thus was probably capable of biting as hard a wolf or smaller tiger. With that kind of strength, biting through bones and entire bodies would be a possibility, which is why small dinosaurs like hatchlings would have been a practical meal option for these formidable frogs.

Before you rush off to argue about B. ampinga vs. T. rex, it should be noted that these are estimates. B. ampinga has very very similar skeletal anatomy to today’s horned frogs, but it wasn’t a perfect match. The ancient devil frogs had slightly longer, shallower skulls, which may have reshaped the musculature into a less powerful configuration. Still, even with some allowances, these mouths were likely bad news for anything that could fit inside.