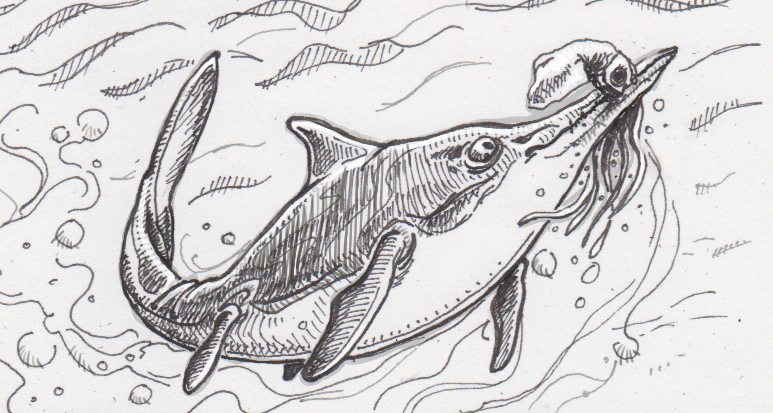 230 million years ago, a lungfish was dining on scaly fish in Poland. 200 million years ago, a young ichthyosaur ate squid for the last time near England. 40 million years ago, a salamander made the somewhat prescient decision to swallow a frog in what is now France. No human was there to witness any of these events, but we can find evidence of these meals by looking into fossils to see what turns up in ancient stomachs and feces. This isn’t always easy though, since stomach contents tend to get jumbled under the best conditions, and more often are smashed and obscured by the passage of time. Fortunately, new techniques and scanning technologies are letting us look inside these fossils without needing to destroy them in the process.

Fossilized feces, called coprolites, can be dense packets of information, but their understandable lack of structure makes them tricky to dig into without making a mess of things. Paleontologists want to avoid simply cracking them open, as they’re more likely than your average skeleton to include fossilized soft tissues that were protected by the poop that surrounds them. To look at these once-stinky treasure troves of digestive data, researchers have been using synchrotron microtomography to essentially x-ray coprolites and build 3D models of their contents, all without damaging the original specimen. In a batch of coprolites from Poland, this has revealed swallowed fish fin rays, scales and uncrushed beetles that were originally eaten in the Triassic period 230 million years ago.

A 200 million-year-old ichthyosaur posed a different kind of challenge. The 27-inch, baby Ichthyosaurus communis clearly had hook-like structures nestled between it’s well-preserved ribs which were eventually concluded to be the corpse of a swallowed squid. While getting a fossil of a normally squishy creature like a squid was a great find, the ichthyosaur was hard to work with because there was no record of where it was excavated. Without knowing which layers of sediment the fossil originated from, researchers had to come up with other ways to date this marine animal’s last meal.

The solution was to try and date the microscopic fossils of other marine life embedded in the rock surrounding the skeleton. Based on the types of so-called microfossils that were contemporary to the ichthyosaur, paleontologists were able to estimate that this specimen lived in the Jurassic period sometime between 199 to 196 million years ago. As this technique is refined, it may help researchers around the world, as many museums have poorly documented specimens needing some kind of context before they can be properly studied.

When we think of eating habits, we often focus on teeth and jaws, but an amazingly well-preserved salamander is offering a lot of detail from just it’s trunk. The headless Phosphotriton sigei not only preserved its last meal within its ribs, but also elusive soft tissues like lungs, muscles and even glands. All this detail again poses the challenge of figuring out to take a look at each organ without destroying the specimen in the process.

Fortunately, the paleontologists who first collected the fossil in the 1870s were patient enough to leave the salamander essentially untouched. This meant that now, 147 years later, researchers had an intact specimen to scan with synchrotron tomography, building a virtual model of all the preserved anatomy. In addition to details about the salamander’s body, we also know that its last meal was a frog, bones and all.

Interestingly, both the ichthyosaur’s squid and the salamander’s frog were noted as being unusual choices for those species. Other baby ichthyosaurs from later in the Jurassic period have been found with small fish in their tummies, not squid. Salamanders are noted as being opportunistic eaters, but generally aren’t known to eat frogs or other amphibians. There’s a good chance that this represents a shift in dietary preferences that wouldn’t otherwise be detectable in an animal’s own anatomy alone, showing how finding an animal’s food offers unique insights into their lives. Or maybe, just to really speculate here, it’s that both animals made a bad choice, and that somehow the squid and frog weren’t just last meals, but also their cause of death?