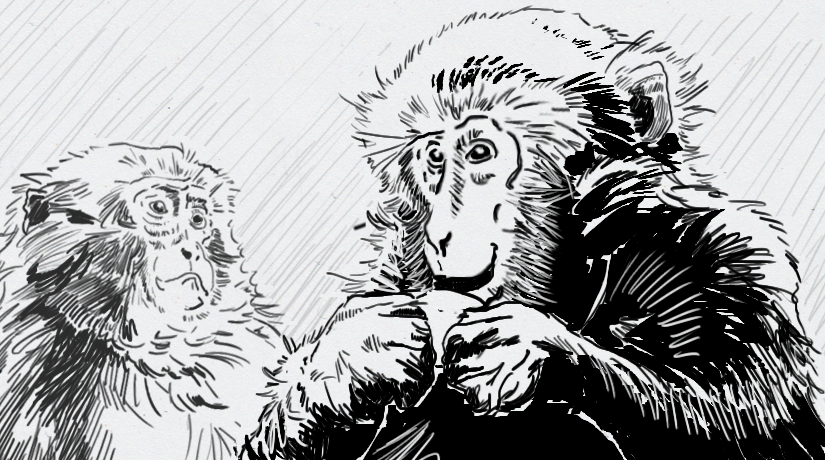 If you take my children’s word for it, they have the most sensitive taste-buds known to man. When presented with a new food, the taste receptors in their mouths can apparently sample the very air in the room to determine that no, this can’t be as good as Mac ‘n’ Cheese, and therefore should not be eaten. These sensitivities don’t leave them with many options though. Watching the kids not eat sometimes makes me wish they were more like Japanese macaques, who’s lack of taste has made managing their diets significantly easier.

The Japanese macaques (Macaca fuscata) are the monkeys often seen warming themselves in natural hot springs. They usually dine on various plants and fruits found in northern Japan, but a group on the island of Kii may have given themselves a bit of a leg up some time in the last 13,000 years. A subset of the monkeys have been found to carry a gene that essentially breaks the TAS2Rs-encoded taste receptors in their mouths. This means they can’t taste bitter flavors as well as most of their brethren, which leaves them at greater risk of missing toxins in their food. It also means that they don’t need to worry about that when eating safe but bitter foods.

This dynamic really started to play out around 2,800 years ago, when the tachibana fruit was introduced to Kii. Ripe fruit is enjoyed by most Japanese macaques, but immature tachibana has thicker, more bitter rinds that the monkeys will reject because of the unpleasant taste. The group with fewer working bitterness receptors don’t taste the strong flavor of unripened fruit, and since it’s not actually toxic, they can enjoy the additional food source for themselves. As Japanese farmers have brought other bitter plants to the, the monkeys with the “broken” genes are getting even more of a boost, as they can steal food most other animals would avoid. Other animals like my kids and their over-productive TAS2R genes.