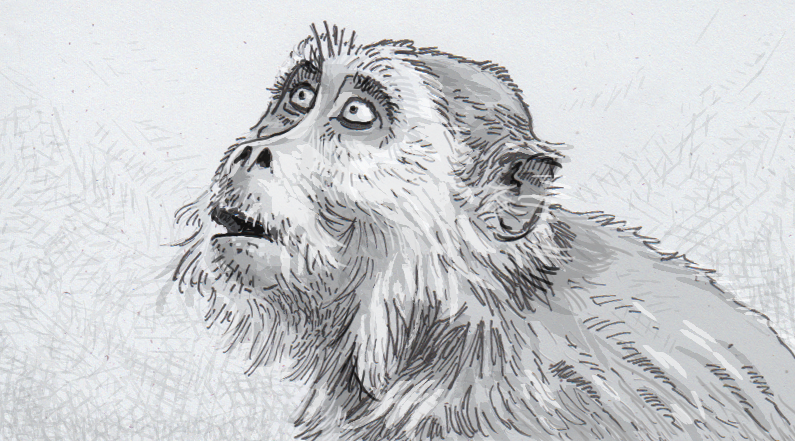 Monkey’s mouths, but not brains, are capable of making humanlike speech

With some training, there’s a chance you could converse with many of humanity’s closest relatives, including chimpanzees, bonobos, gorillas and orangutans. Aside from the fact that this animals probably haven’t been keeping up with movies or politics, your conversation would be limited to visual communication— despite all our similarities, no other primate seems to be able to speak like humans do. Considering our various similarities, both genetic and otherwise, this has been a bit confusing. The most popular explanation has been that these animals simply didn’t have the sophisticated vocal tract that we do, and simply couldn’t get the words out, even if they wanted to. New studies of a long-tailed macaque (Macaca fascicularis) named Emiliano suggest that there is an anatomical deficiency behind this, but it’s tied closer to primates’ brains than their vocal chords.

The hypothesis that non-human primates’ speech was limited by their vocal tract was largely based on dissections of apes and monkeys. Their vocal tracts just didn’t seem capable of producing the 400 different phonemes, or unique sounds, that humans speak with around the world. Researchers in Austria challenged this idea by using X-rays to record the movement and activity of Emiliano’s vocal tract, from his larynx to his lips, as he sat in a chair doing various activities. The macaque wasn’t trying to speak, but yawing, chewing, grunting and cooing still gave his vocal anatomy enough of a workout to figure out its mechanical limits. After measuring these tissues in action, the team analyzed and simulated what range of sounds were technically within range of Emiliano.

What they found was that Emiliano’s throat, tongue and lips could probably handle a lot more sounds than the monkey tried to make. He was physically capable of making five vowels sounds, which put make most of the world’s languages within reach. A simulation of how Emiliano might say the phonemically-diverse phrase “Will you marry me?” revealed that while the macaque probably wasn’t going to land a record contract any time soon, he was at least capable of being comprehensible.

So why is Emiliano speechless?

These realizations didn’t convince Emiliano to start chatting, of course. With vocal chords and tongues being ruled out, the suspicion is that other primates simply can’t make use of these tools the way humans can. These pieces of critical anatomy don’t have direct connections to the brain, meaning they can’t be commanded with as much sophistication as humans employ when talking. There also seem to differences between the auditory and motor cortices in monkeys that likely make imitating sounds more difficult. This would mean that even if monkeys could get their mouths making a bunch of new sounds somehow, they’d have a harder time learning to make the specific phonemes that would actually count towards speech.

Aside from helping explain why your favorite ape just isn’t answering you, this has implications for human evolution as well. If a primate as distantly related as a macaque has a vocal tract capable of speech, then the evolutionary moment that humans started speaking probably won’t be visible in fossils or other visible anatomy. Estimates for the first human speech range from 100,000 years to 1.75 million years ago, and this research suggests that narrowing that down won’t be done by looking at the shape of tongues or trachea. Instead, we’ll have to better understand how our brains developed.

Source: Monkey speak: Macaques have the anatomy, not the brain, for human speech, Scienmag