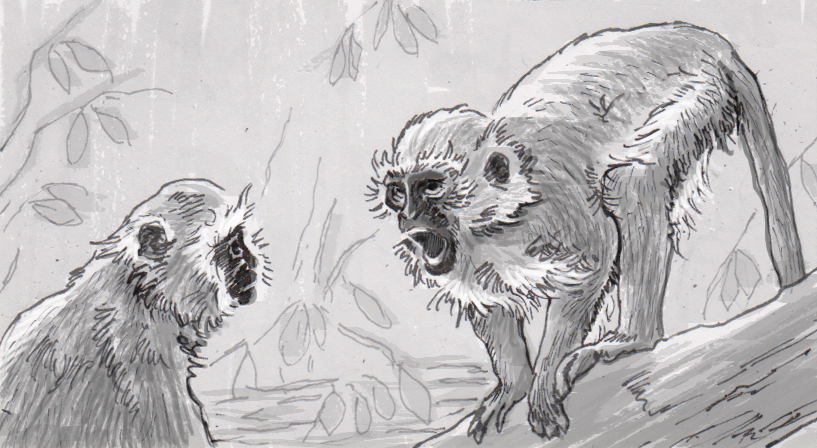 Monkeys will punish their peers to preempt larger outbreaks of violence

There’s a surprising degree of subtly in monkey-on-monkey violence. While a brief spat between two individuals is unlikely to have a large impact on a group, extended conflicts are much more likely to large-scale violence. As a fight wears on, researchers have found that combatants employ a sort of collective memory, and will make a point to fight every available adversary, which increases the duration of the battle as well as the risk of serious injury. The monkeys themselves seem to appreciate these risks, as species like vervet monkeys (Chlorocebus pygerythrus) from southeastern Africa make specific efforts to prevent bigger fights, even that means causing a bit of harm to one of their own allies.

If a conflict is brewing between two larger groups, female vervet monkeys have long been known to campaign either for or against brawls. In some cases, they will offer extra grooming to potential fighters to sway their opinion one way or the other. If the “carrot” approach doesn’t work, females will also use a “stick” in the form of harassment and coercion, even if that requires banding together in a group to be more intimidating to the generally larger male monkeys.

To dominate or deter?

Until recently, researchers assumed that the male vervet monkeys were always up for a fight. They didn’t seem to offer rewards to their peers, and the punishment and coercion they would use against males in their own social groups was thought to be a way to keep their peers from competing for the wrong mate. However, more careful observations found that the males never made a move to stop females from interacting with other males, even when those males were from other social groups. This acceptance of female autonomy seemed to indicate that monogamy wasn’t the primary motivation behind the males’ punitive behavior.

The final clue was that fathers of young offspring were the most likely to exhibit punitive behavior towards other male monkeys. Researchers now believe that males aren’t roughing up their peers to assert dominance as much as they’re stopping would-be troublemakers from starting fights. Since those intra-group fights could be dangerous to the males, but especially to their more vulnerable offspring, these male monkeys have a clear incentive to keep larger fights from threatening their family. It’s certainly a more noble incentive for coercion than simply asserting dominance, but the targets of this abuse probably wish the protective males would work a little harder on their diplomacy instead of their left hooks.