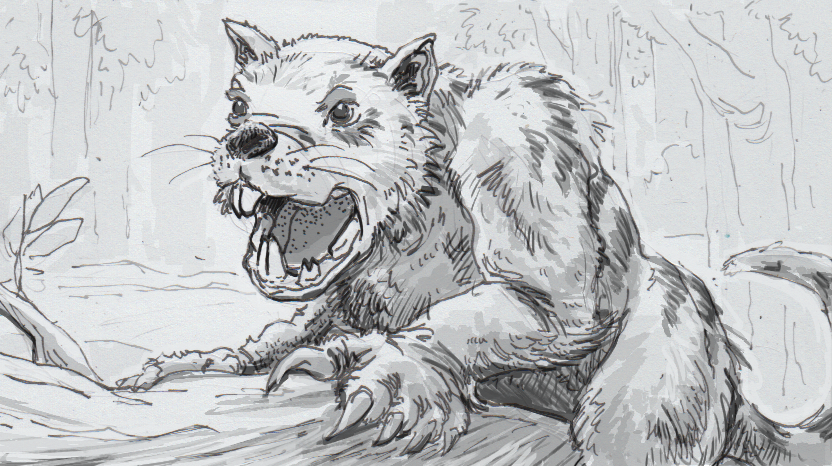 Australia may have a delightful variety of venomous spiders, tree snakes, and ill-reputed Tasmanian devils, but the isolated continent lacks any large predators that could compare to those in Africa or South America. This hasn’t always been true though, as there used to be an impressive predatory marsupial called Thylacoleo carnifex stalking the forests. While it was related to cute, modern critters like wombats and koalas, T. carnifex was likely an ambush hunter with the strongest bite ever known on a mammal.

While T. carnifex was a marsupial, it’s more often compared to modern lions. Fossils indicate that it likely weighed between 220 to 280 pounds, with a body approaching four feet long from head to tail. While smaller than a large African lion, the skull structure indicates that T. carnifex packed a lot of power into its smaller frame. The nose was short, with large cheek and jawbones, while the brain case wasn’t especially large, leaving ample room for large muscle attachments. This anatomical focus would have given the creature an incredibly strong bite, enough that even a 6,000 pound Diprotodon was on T. carnifex’s menu.

A strong jawbone alone isn’t enough to down huge prey of course, and T. carnifex certainly wasn’t gumming its prey to death. The front legs of the predator had clawed digits, including large, flexible thumbs that would have helped the creature hold onto, or possibly disembowel, prey. At the front of the mouth, T. carnifex had two large teeth jutting out of the lower jaw. Most of the biting power was delivered by two, elongated premolars on each side of the mouth. Like many large cat’s molars, these over-sized teeth were likely used to slice muscle off of bones, similar to the cut you’d make cutting breast meat off a turkey. Evidence of these powerful bites was originally misidentified as man-made, as the slices and punctures found in some bones looked clean and deep enough to have been the result of human tools.

We do know that the humans that arrived in Australia 46,000 years ago took note of T. carnifex. Drawings in caves show a striped creature with notable claws, pointed ears and distinct eyes. While it’s great that these humans recorded some features that couldn’t be preserved in bone, they may have also had a role in the predatory marsupial’s eventual extinction. The exact timing of T. carnifex’s extinction isn’t known, but it likely came shortly after humans’ arrival, possibly due to competition for food. Direct confrontations between the two species may have also been a factor, as a second depiction on cave walls shows the strong-jawed animal facing off against a spear-wielding human.