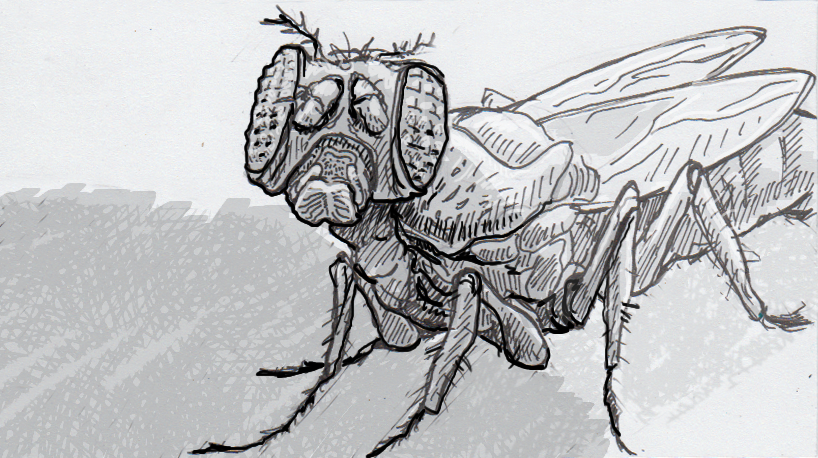 More than a feeling: How to test for fearful fruit flies

It’s not hard to remember how fear feels. You can probably recognize fear in another person pretty well too. Maybe even your dog. But as you get farther away from your own experience, you have to infer and assume more and more about what a third party might be feeling. If you’re looking at an animal like a fruit fly, you really can’t expect much in the way of legible social cues, so researchers have come up with a few metrics to help test if these insects are experiencing something we can consider fear or if we’re just projecting our own emotions on their reactions.

The first step was figuring out what might be fear-inducing to a fly, and the obvious choice was potential mortal danger. For a fly, that’s likely to come in the form of a shadow overhead just before a swatter, beak or other appendage comes down and does you in. Flies would clearly react to shadows overhead, but further nuances were measured to make sure it was more than just a reflex to avoid danger.

The first metric (or “emotional primitive”) to see if the flies were fearful was if the flies still behaved excitedly and cautiously even after the stimulus was gone. Did they remain jumpy for a few minutes? The next metric was if more shadows intensified the flies’ response, since more of a scary thing is that much scarier. The final metric was if normally non-threatening stimuli would make a previously frightened subject more startled than normal. Basically, would the threat of a shadow linger over these flies, even causing them to be jumpy and nervous about familiar things for a few minutes?

The tests showed that flies do react with a sense of fear, according to this definition. Eating flies would stop eating even, returning to their food after longer and longer intervals if the shadow of potential doom returned. They were making the tough calculations about if eating their fill now was worth the risk of immediate death, or if they should flee at the risk of not finding more food later.

The goal of the study was not to make you feel bad the next time you swat a fly, now knowing that you’ve probably ensured its last moments were terrifying. We’ve studied drosophila melanogaster for years, and have mapped much of their brain function already. This gives us a head start on further understanding what happens on a physiological and neurological level when an animal, from a bug to a human, experiences emotions like fear.

Source: When flies fly in the face of danger are they afraid? by Jason Goldman, Animal Behavior