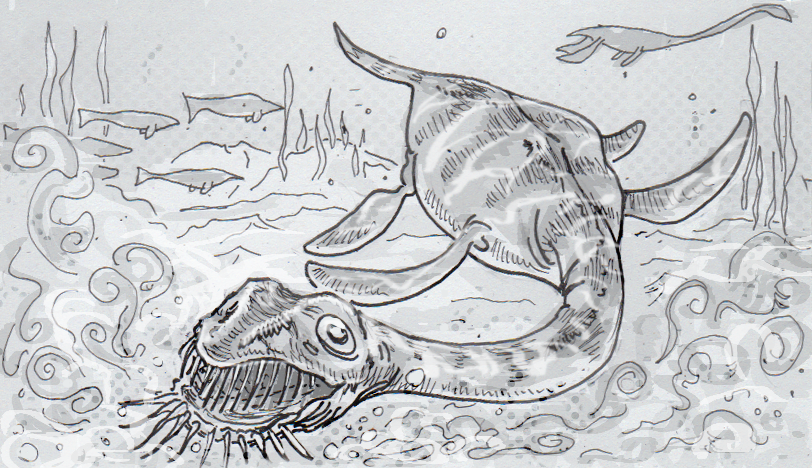 Mortuneria, the plesiosaur that skipped biting to sift for its snacks

Looking at a tyrannosaurus in the mouth, it’s immediately evident that these animals were eating meat. The multi-ridged molars of a triceratops look great for grinding up plants. Hadrosaurs are a bit more complicated, but those teeth still pretty obviously meant to eat stalks and twigs. And the hoop-shaped mouths of a Mortuneria, with teeth jutting out of the lower jaw, were strictly for… well… that might take some time to work out. Fortunately, researchers from Marshall University have been working on this baffling mouth for the last 25 years, and believe this odd plesiosaur used it’s mouth to dredge the ocean floor, sifting through the mud to find small, immobile prey. Obvious, right?

Mortuneria lived in the Cretaceous period along side may other marine reptiles. Most of its peers were occupying more traditional predatory niches in the oceanic environment, preying on both small and large sea-life, while growing as large as 50 feet long. Their jaws varied in size and bulk, but they were generally consistent with mouths meant to capture and swallow swimming prey. Mortuneria’s mouth didn’t follow this layout, with the jaws moving to an overlapping position if they were ever forced closed in a bite. Further weakening the bite was the fact that the teeth were not aligned to slice or grind against each other. The top row of thin teeth pointed down, as you might expect, but rather than interlocking, the teeth on the lower jaw stick out and even further down, in an array my six-year-old called a “tooth beard.”

It was clear that Mortuneria wasn’t biting, but what could it do with this odd dental arrangement? The lower teeth are assumed to have acted as an external seive as the reptile dredged the sea floor, churning up small crustaceans and molluscs. The top teeth would have further filtered out mud and rock. To finish the process, Mortuneria had a notably deep palate, which would have allowed it to expunge larger amounts of water from between the top teeth, trapping food inside the mouth.

A mouth so weird, evolution made it twice

If this plesiosaur’s anatomy weren’t odd enough, there’s a new question of Mortuneria’s lineage. There are some possible filter feeding plesiosaurs from the Jurassic, but they seem to have been extinct well before Mortuneria appeared in the Cretaceous. Without new specimens linking the species together, it would seem that filter feeding evolved more than once among marine reptiles. It’s possible that they were so dominant in the oceans as predators that species had to into new diets, like filter feeding, in order to carve out an ecological niche of their own.

Source: A Long-Necked Marine Reptile Is the First Known to Filter Feed Like a Whale by Brian Switek, Smithsonian.com