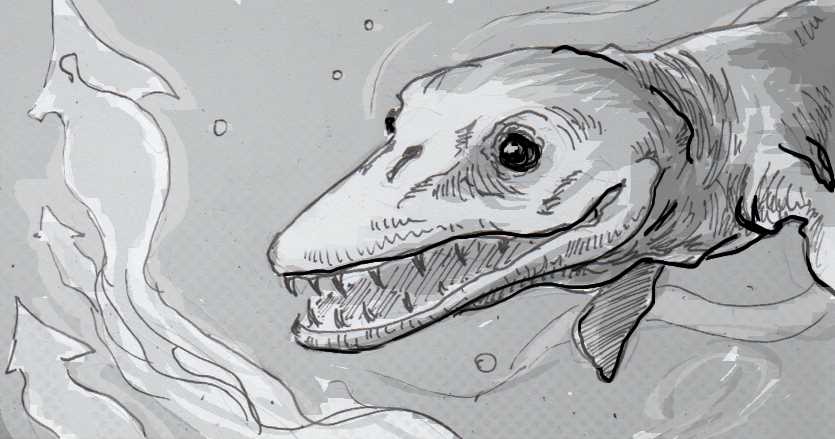 Mosasaurs were large, predatory marine reptiles that patrolled the oceans in the Mesozoic era. Some could grow as large as 65 feet long, with long, powerful tails that would let them chase down just about any prey they wished. A new mosasaur fossil, found near Japan, bucks that trend a bit. Phosphorosaurus ponpetelegans was still a predator, but this late Cretaceous sea monster only grew around 10 feet long. What’s more, the skeleton and well-preserved skull indicate that it was likely a very different kind of hunter than it’s larger relatives.

The skull in question was found deep in a matrix of rock a few years ago. Bits of fossilized bone were exposed in multiple directions, and so the restorers painstakingly worked to remove the rock interwoven between the various sockets and spaces without damaging the fossils themselves. After two years of work, the resulting skull was worth the effort, as it clearly preserves the complete three-dimensional shape of the animal’s head, complete with forward-facing eye sockets.

The eye placement is significant, because other mosasaurs have their eyes on the sides of their heads. While many prey animals have their eyes located facing sideways to help them detect possible danger from all angles, these large predators were aiming for efficiency, not safety. Eyes on the side of the head would allow the reptiles to be more hydrodynamic as they cut through the water, whereas front-facing eyes would be pushing right into the water when moving quickly. Think of where a shark or whale have their eyes, and you start to get the idea.

P. ponpetelegans likely had a different set of priorities. While it’s tempting to compare it’s eyes to ours or those of a lion, which allows for binocular, depth-perceiving vision, the smaller fins and tails on P. ponpetelegans make it less likely that it was oriented to be doing a lot hunting through speedy pursuits. Instead, researchers suspect that these eyes might be better compared to those of an owl- large and forward facing in order to gather as much light as possible from dim conditions. By having both eyes focus on the same location, smaller amounts of light would be more easily detectable. As this mosasaur lived in an area likely populated with bioluminesant animals like lantern fish, this anatomical configuration would be a good match for a nocturnal ambush hunter, staring into the dark water for the tiniest glimmers of light before making quick, short strikes.