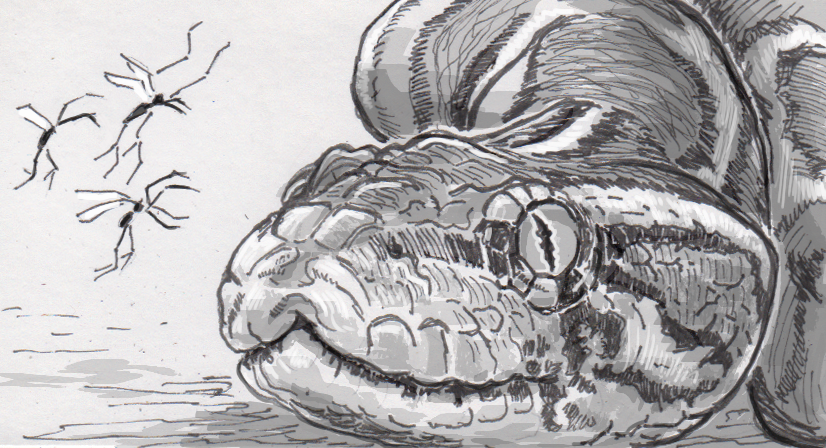 Burmese pythons (Python bivittatus) often grow up to twelve-feet long, but they’re still surprisingly hard to find in the wild. This is bad enough for the prey these snakes want to ambush, but it’s created challenges for researchers tracking their activity as well, even in environments where these snakes aren’t supposed to live. Since the 1980s, failed pet-owners have been importing and releasing pythons in the Florida Everglades, harming the native wildlife in those swamps. Fortunately, one local species seems to be quite adept at locating pythons, which is why researchers are “recruiting” mosquitoes to help track the snakes.

Despite the mobility of an individual mosquito, they’re still easier to capture than a single Burmese python. The work starts with cardboard funnels and hand-held vacuum cleaners, but is then followed with DNA sequencing in the lab to see what species of animals the mosquitoes have been eating. When python DNA turns up, it lets researchers construct a map of where they’re moving, and possibly how they’re multiplying across the Florida swamps.

Since this work started in 2015, a few trends are already clear. Python populations have been growing, and expanding northward. At this point researchers don’t have a strict head-count on the snakes, but they know that there are enough to be making an impact on other species in the Everglades. Raccoons, for instance, have been getting eaten often enough that the turtle and alligator eggs they usually eat are hatching at unusually high rates.

Other types of tracking

If digging through mosquito stomachs seems too indirect, conservationists have a few other ways to follow invasive pythons. One option is to collect samples of dirt found near burrows, then dig through them for traces of python DNA. Each time a snake slithers by, it sheds a bit of DNA, eventually leaving enough to confirm activity in specific locations.

For something a bit more actionable, there’s the sentry snake program, conducted by the Conservancy of Southwest Florida. Male pythons are outfitted with radio trackers, then released back into the wild where they’ll hopefully find a mate, and possibly some friends. Once contact seems to be made, conservationists can raid the “aggregation” of snakes, capturing other males and any fertile female snakes that were fertilizing eggs. This method is rather labor intensive, but it has led to the removal of over 3,000 fertilized eggs from the Florida swamps before they had a chance to hatch.