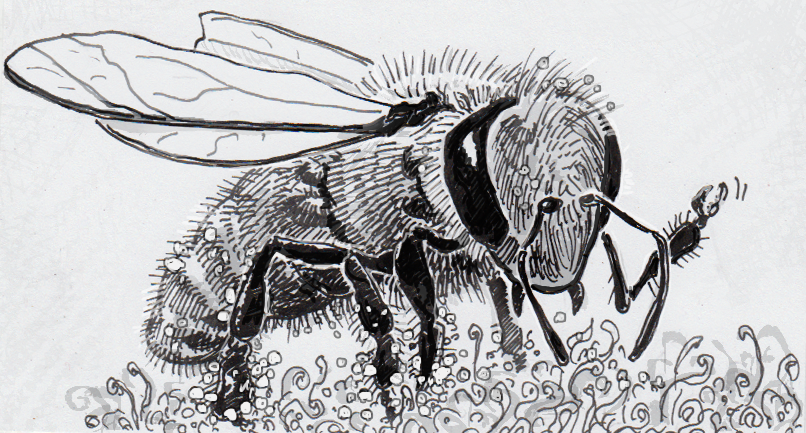 Most bees are more benign than belligerent

It’s hard not to duck or jump away if you see a bee flying around you. The possibility of a sting feels like a serious threat (and if you’re allergic, it is.) But how much of a risk to your health and safety is a honey bee on a nearby clover? Is a bumblebee flying near you just waiting for its chance to strike? Unless you also happen to be attacking their hive, most bees are not aggressive insects, and in some cases are literally incapable of harming you.

The sting of a honey bee is famous, but not for the damage it does to us. The stinger is barbed, which is fine for stinging other insects, but can become stuck when piercing something thick and elastic like our skin. At that point, the bee can either hold on and hope to get loose, or break the stinger off, disemboweling itself in the process. The only tactical upside is that the venom sac often stays with the lodged stinger, allowing a higher dose of venom and maybe some pheromones alerting other members of the hive that the target is a threat.

This grim scenario isn’t cause for alarm though. Most worker honey bees have no interest in stinging you as they forage in the flowers. And male drones are incapable of stinging you, as they lack the modified ovipositor that makes up the worker’s stinger. Even swarming bees, while slightly intimidating, aren’t interested in stinging you while they search for a new home. The moment to be worried is if you’re perceived as a threat to the colony, at which point the response may be more aggressive, or rather, defensive, which is really why the bees have stingers in the first place.

Bumblebees are usually bigger, fuzzier and… not really any more threatening than a honey bee. They don’t have barbed stingers, so they are capable of stinging you multiple times, but that doesn’t mean they want to. In fact, they’ve been known to use posturing to warn animals they find threatening. They start by raising one forelimb, then the other, eventually resorting to displaying their stinger if they still feel threatened. If the offending animal doesn’t give the bee more space after these initial warnings, bumblebees still aren’t guaranteed to make good on their threats.

As with honey bees, the best way to actually get stung is by threatening the colony. And once again, only females can sting you. The males, which can be identified by a tuft of yellow hair on their face, similar to a gold mustache, do not have a stinger.

The last group of bees to consider are “wild,” “native,” or “solitary” bees. These names come from the fact that these bees are not social and have no colony to go home to. Since stinging is usually used in defense of the colony, these bees’ stingers are relatively harmless. In many cases they cannot even puncture your skin to deliver any venom. And as with other bees, males lack a stinger entirely.

My first grader said: At school some kids were trapping and trying to kill bees that were flying around the bushes. As sad as this scenario is, it’s worth noting that the kids were not stung at all in the process. That’s not to say that the bees were going to tolerate attacks forever, but it does show that most of the time a bee is not interested in attacking people. Presumably the bees’ hive was far enough away that these kids weren’t considered a threat worth attacking.

Source: Which Bees 'Sting' and Which Don't? by Brigit Strawbridge, Beestrawbridge.blogspot.co.uk