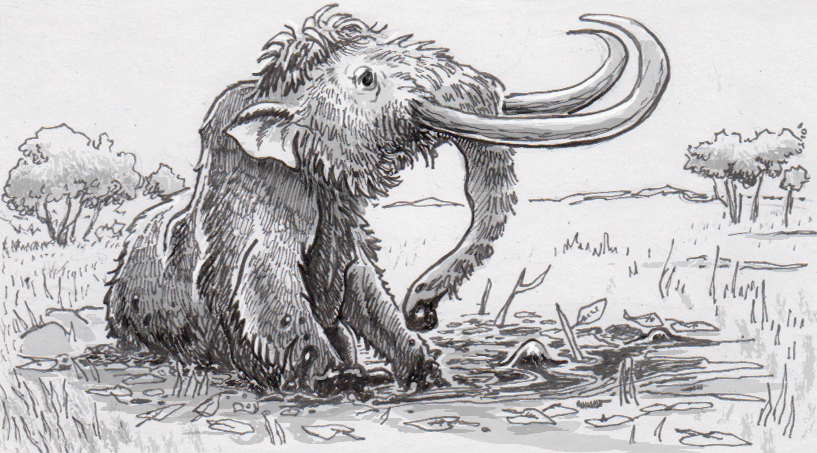 One of the most important features of the La Brea Tar Pits in Los Angeles are the traffic cones. The museum’s collection of Pleistocene animals is great, as are the continuing excavations taking place at the site, like Project 23. However, having just returned from my kids’ first visit to the Tar Pits, I think the entire experience was greatly enhanced natural liquid asphalt bubbling out of the ground in the surrounding Hancock park. Some bigger pools are fenced off, but it’s clear that the asphalt is slightly unpredictable, sometimes oozing outside a barrier, or simply popping up in the middle of the lawn, with only an oil-splattered traffic cone to warn you of its sticky presence. It all helps drive home just how animals living in the Los Angeles basin 60,000 years ago might have gotten into trouble without the bright green cones in place to warn them.

The La Brea Tar Pits weren’t the only natural hazards Ice Age animals had to worry about, and a recent study of mammoth (Mammuthus primigenius) remains from Siberia looked for patterns in which creatures most often got themselves into these sticky situations. Excavations of geological dangers like asphalt pools and icy lakes had already established that one trapped herbivore was likely to attract huge numbers of carnivores (that would also end up trapped), but this study looked to see which particular mammoths couldn’t stay out of the asphalt, ice or other pitfall. Since these animals were well preserved from only 60,000 years ago, DNA from hair and bones could be used to determine that 69 percent of the trapped mammoths were male, despite having originated from a balanced population.

Males in the muck

Researchers suspect that, if mammoths follow some of the behaviors seen in their modern elephant relatives, the unusual sex-ratio was due to male mammoths’ inexperience. Elephants today generally rely on the leadership of an older female, and that matriarch retains and transmits information about everything from when to migrate to how to avoid hazards in their environment. Young male elephants have to figure all this out themselves, even if it means finding out the hard way.

If mammoths lived in a similar manner, the males likely fell into pits and asphalt pools more often because they had nobody to teach them until it was too late. A higher tolerance for risk may have also made them more likely to try stepping on the weird black stuff in the grass, since without a matriarch or green traffic cone to warn them, they weren’t sufficiently wary of what now seems like an obvious danger.

My third grader asked: What’s the asphalt made of? 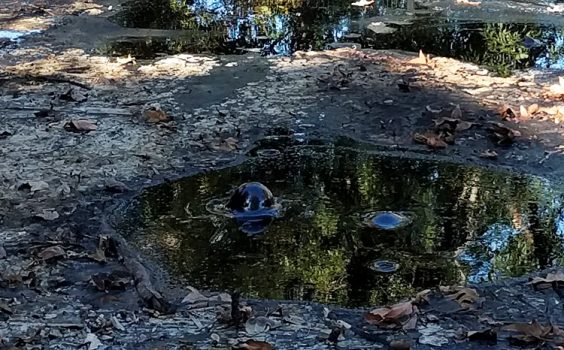 While male mammoths were apparently adept at getting stuck in all kinds of hazards, the pachyderms in what would become Los Angeles were stuck in a natural asphalt, which is the lowest grade of crude oil. This oil is a layer of decomposed, pressurized marine plankton, first laid down five to 25 million years ago. The bubbles are generally methane gas, although microorganisms in the oil help create hydrogen sulfide, which adds a notable “rotten egg” smell.

It’s not clear how ancient mammoths missed the bubbles and the smell, but once dust and leaves covered the surface of a shallow oil pool, it seemed to only take a few steps to completely ensnare mammoths and other megafauna.