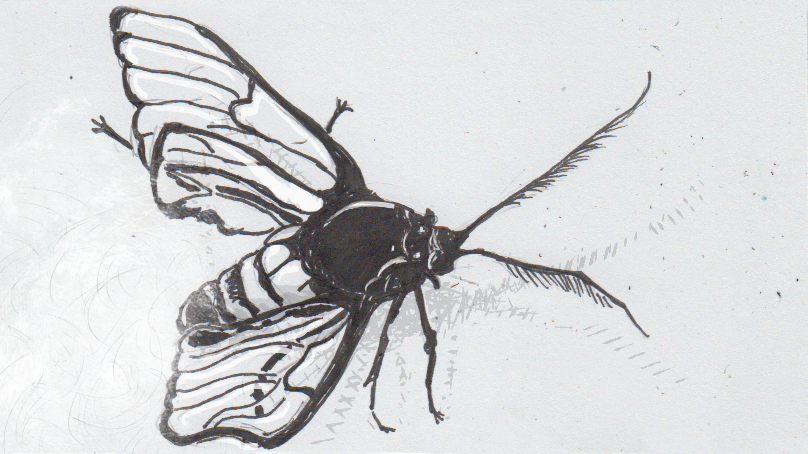 To survive being eaten by larger flying animals, various species of tiger moths seem to be willing to through just about anything at would be predators. Some even double up, carrying a toxin that makes them taste bad while also emitting ultra-sonic sounds that disrupt a bat’s echolocation. Some display bright colors to warn off birds, while others imitate the look of wasps to get predators to pass them over. The newest addition to the arsenal may be one of the weirder options, which is to basically fart out a cloud of sticky fluff when in danger, which at the very least shocked and baffled the researcher who first discovered it.

The new species, nicknamed spider moths, looks a lot like the wasp-mimic Homoeocera albizonata, complete with iridescent blue wings. The key difference is that the males so var observed also have high contrast patches of white on their abdomen, some of which are actually the pockets of defensive fluff, called flocculent. When threatened, either by people or by predatory bats, the moth can then eject the flocculent in a quick burst, which then fluffs up and can waft through the air like dandelion seeds carried on the air. While the moths have been observed escaping attacking bats with this technique, it’s unclear if the flocculent carried some form of irritating toxin on it to dissuade the bats, or if the surprise and distraction was enough on its own.

Not a completely novel concept

The idea that the flocculent carries chemical agents in addition to its fluff stem from the fact that a similar substance has been used by other moth species as a tool in courtship. Rather than toxins, the white, woolly substance carries pheromones to attract a mate. If an evolutionary connection can be proven, it’s possible that the new spider moths repurposed this reproductive tool into a defense mechanism. Even that idea has a precedent, as hawkmoths can use specialized claspers on their genitalia to make echolocation-jamming sounds. The catch of this connection is that flocculent in these moths comes in limited supplies, so if the new moths are using it for finding mates and self-defense, each dangerous encounter with predator might cost them the chance to find a date later on. But not as much as being eaten would, so it’s still probably a good idea.

Source: This new moth has an explosive way of fending off bats by Zoe Gough, BBC Earth