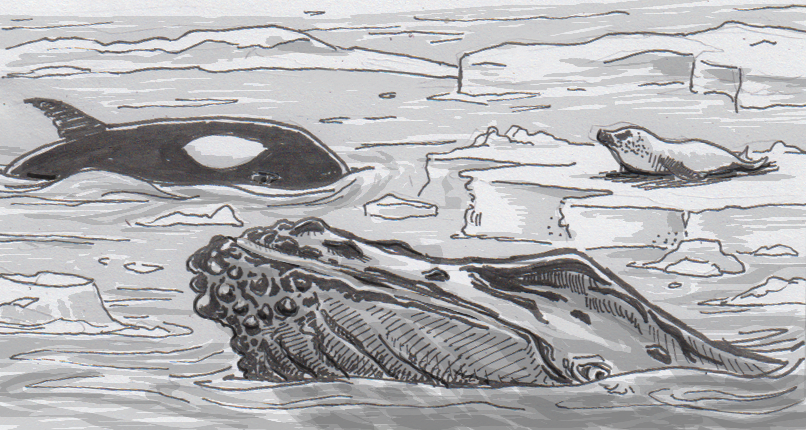 The motivations and mechanisms that spark humpback whales’ seal rescues

For a seal sitting on a piece of ice, one of the worst things to see is a set of black fins cruising in your direction. The concern isn’t sharks which wouldn’t do much to seal out of the water, but orcas (Orcinus orca). The toothed whales have learned to swim alongside each other to create a wave of water big enough to wash seals into the water, at which point the pod can make a fairly easy meal of them. At that point, a seal’s best hope may be to see other fins in the water, because they may belong to some humpback whales coming to the rescue.

The arrival of the humpbacks (Megaptera novaeangliae) is likely to play out in the seal’s favor, as the humpbacks seem to actively protect the smaller mammal from any hungry orcas in the area. This protection comes in the form of loud, shrill vocalizations akin to shouting down an aggressor, followed by slaps from flippers and tails if necessary. The humpbacks will move their larger bodies between the orcas and their intended prey, basically being disruptive and obnoxious until the orcas give up and leave the area. In at least one sighting, a humpback whale even used a flipper to help position a targeted seal on its chest while swimming along the top of the water, keeping it protected from the orcas’ mouths just a bit longer.

Why fight for a non-whale?

This type of behavior has been witnessed at least 131 times, but scientists are still a bit unclear on how to describe what’s happening in these encounters. The humpbacks are undisputedly trying to protect the seals (or other small prey, including baby gray whales and of course actual humpback young,) but attributing the motivation behind these actions is where things get a little squishy. It’s easy to say they’re being selfless and caring for the smaller animals, but that may be editorializing both the humpbacks’ and orcas’ actions too much. Just as the orcas are hunting seals for sustenance, not to be mean, the humpbacks may have a slightly different motivation than strict altruism driving them to the seals’ aid.

One description that’s been made about the humpbacks’ intervention is that they’re mobbing. When a prey animal “mobs” a predator, it acts with other members of its species to just pester and overwhelm the predator until the predator gives up and looks for food elsewhere. This can be seen when crows or jays band together to chase a hawk away from their nest. For the humpbacks, adults aren’t eaten by orcas, but babies are, and the seals may trigger maternal instincts in the whales to protect their young by teaming up in this way.

The assumption isn’t that the humpbacks are confused and believe the targeted seals are actually baby humpbacks, Instead, this case of intra-species care, known as alloparenting, may just be one instinct about protecting one’s offspring bleeding over into other behavior. In this case, it’s kind of a happy coincidence for the seals that the humpbacks are just devoted to the idea of driving out orcas that are attacking anything. However, there’s still a chance that this actually provides a benefit to the humpbacks, even indirectly. At this point, the data is still too loosely assembled to identify a specific mechanism that helps the humpbacks and makes these encounters worth it to the large whales. As more incidences are documented, there’s a chance that such a pattern will emerge to explain why humpbacks care so much about stopping orcas’ in the middle of a hunt. Such as a desire to help out the little guys in the sea.

Source: Why did a humpback whale just save this seal's life? by Erik Stokstad, Science Magazine