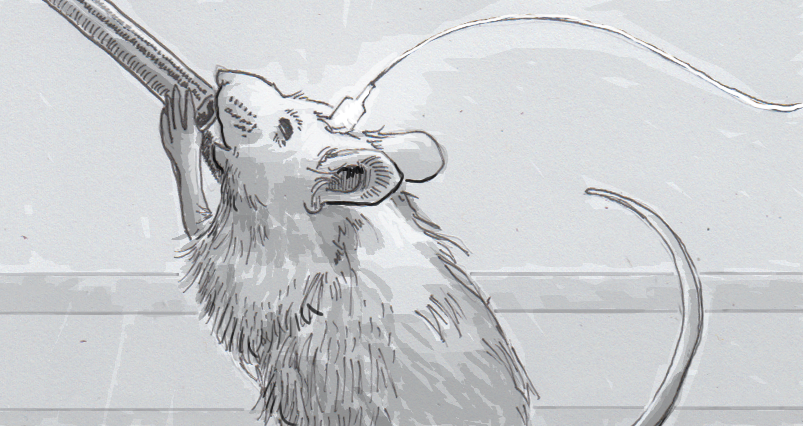 In a move my children could hardly believe was necessary in the first place, researchers at Stanford University have manipulated the brains of mice to get them eating milkshakes faster than normal. As much as the rodents may have normally enjoyed their sugary beverages, neuroscientists found a way to up their enjoyment more than normal. Sadly for my kids, this isn’t an easily shared experience, since it required specifically-engineered brain cells, plus the lasers to trigger them.

The concept of triggering changes in brain activity, and then behavior, with light shined on specific neurons is called optogenetics. Being able to discretely trigger parts of the brain is being pursued for a variety of goals, from researching how memory works in the brain to creating feedback loops to stop self-destructive behaviors. Theoretically, light on specific neurons could activate preferred responses to negative stimuli, like muting post-trauma flashbacks or withstanding the temptation of an addictive substance. However, before any of these applications can be put to use, researchers need to hone the accuracy of the process, so that only the intended responses are triggered.

As a step towards that goal, mouse brains were watched when they had brief contact with a baby mouse. Looking at the pleasure centers of the brain, researchers mapped which neurons were activated by this social contact, and which cells were instead suspected of being tied to food-oriented stimuli. These specialties were then tested while the mice lapped up a sugary drink— when social reward neurons were activated, the mice didn’t respond much, but when the alternate set of food reward neurons were lit up, the mice drank much faster than usual. The light intensified the reward feedback of the tasty drink, effectively making it the tastiest snake the mice had ever had.

Researchers at Columbia University have been working on a sort of inverted approach to optogenetics, purposely bundling behaviors instead of trying to isolate them. After training mice to lick a reward in response to seeing specific visual patterns, they noted which neurons played a role in that behavior. Optogenetic stimulation of the related cells was then able to trigger the licking behavior, even when the triggering pattern wasn’t actually in front of the mouse’s eyes.

While humans probably have a long time to wait before we’re manipulating our brains on this level, mice can at least look forward to some extremely tasty snacks, even if they’re at least half in their imagination.