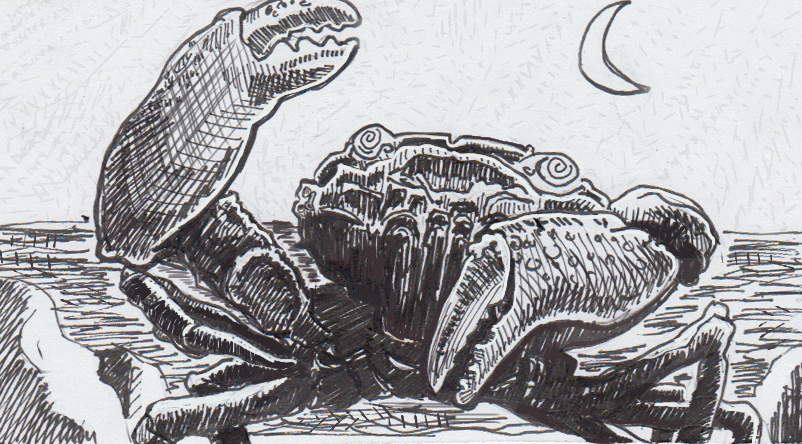 Mud crabs are zombified by barnacles in their brains

A classic component of a good zombie story is that victims loose control of their brains. They cede their will to a some new master— a ravenous hunger for the living, or, in the case of my kids, a YouTube video. While we like to say that these stories are fiction, many animals face a real danger of being zombified from parasitic fungi, wasps, or even barnacles. These aren’t the barnacles you see on the sides of ships or whales, but a species that has evolved to integrate itself into the bodies of mud crabs.

The parasite in this case is known as Loxothylacus panopaei.This species of barnacle seeks out flat-backed and white-fingered mud crabs while still in its larval state, which is when most barnacles cruise the ocean to find a place to settle down. Rather than attach to the outside of the crab to become a knobby annoyance, female L. panopaei actually squirm their way into the crabs and begin growing around all of their vital organs, essentially bonding with their host. It’s not a seamless process though, as male crabs are effectively castrated in the process, and all crabs end up losing control of themselves once the barnacle takes over their brain.

Once zombified, the barnacle keeps the crab fed just enough to ensure it remains a serviceable home and nursery. The crab’s shell starts growing bulges on the sides, leaving room for future barnacle larvae. Before they arrive though, the barnacle needs to find a male to mate with. Once fertilized, a small egg sac emerges from the back of the host crab, which can then hatch new larvae every couple of days.

Being transformed into a walking barnacle incubator is obviously a problem for the crabs, but there could be long-term problems for the species in certain locales. The Chesapeake Bay has been reeling from the invasive barnacles, which probably arrived from the Gulf of Mexico via oyster fishermen. Since this is the crabs’ first real exposure to the parasites, they don’t have any natural defenses— their frequent molting as juveniles means their shells are often soft, making them easy targets for zombification. Researchers are looking for ways to protect the native crustaceans, and so far the only clue is that the barnacles seem to be sensitive to the water’s salinity. That doesn’t provide a solution yet, but it may be the first step in fending off waves of mindless hordes.

If you’re in the area and want to help, you can volunteer to assist with surveying crab populations in Chesapeake Bay with the Marine Invasions Research Lab.