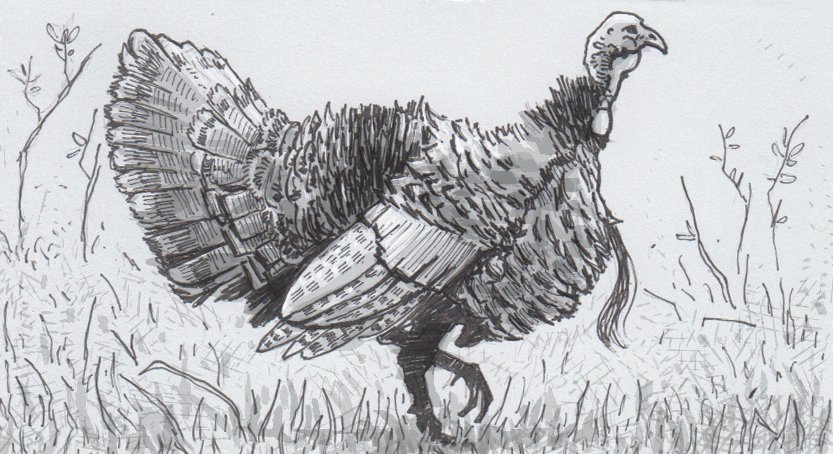 The multitude of misunderstandings behind (mis)titling turkeys

This Thanksgiving, many Americans will sit down to eat a large bird with fluffy plumage and a relatively small head. Your safest bet is to refer to this animal as Meleagris gallopavo, but that probably won’t do you a lot of good at the grocery store. You’d probably get the bird you expect asking for a ‘turkey,’ but historically that’s been a pretty convoluted mess, since these natives of Mexico have been confused with multiple other species in a handful of languages, including English, French, Spanish and Portuguese. In English, at least, the naming confusion started because people couldn’t identify where completely different bird came from.

The originally misnamed bird is the helmeted guineafowl (Numida meleagris), which looks a lot like a North American turkey. They have fluffy dark plumage, blue and red skin on their heads, and spend most of their time on the ground. To Europeans, these birds seemed like exotic creatures, and Guinea seemed like an appropriately exciting point of origin for them, even though they are actually natives of Africa. Some of these details were probably muddled in a game of international-trade-telephone, since the African birds were being sold by Turkish traders, prompting lazy Europeans to call them turkey-cocks and turkey-hens.

Things got more complicated when Spanish explorers found M. gallopavo strutting around Mexico in 1523. When these birds were brought to Spain and North Africa, people noticed how much they looked like the birds they were coming to know as turkeys. Beyond that, calling these new birds turkeys implied that they also had a bit of that eastern mystique, which somehow made eating them more satisfying on Christmas day.

Turkey in other tongues

Not everyone had the same relationship with Turkish bird traders, but that didn’t stop other cultures from just making up their own points of reference. Rather than retread the imaginary Guinea connection, the French started calling turkeys poulet d’inde, or ‘chicken from India,’ which was later shortened to just dinde. The Turks knew turkeys weren’t really theirs, so they followed France’s lead and called the birds hindi, meaning ‘Indian.’ The Portuguese at least had the right hemisphere in mind when they named them Peru birds. Indonesians flipped the whole ‘exotic’ concept, naming them ayam belanda, or ‘Dutch chickens.’

With so many people picking new points of origin for M. gallopavo, you might hope that the original Spanish Conquistadors that exported the birds from Mexico would stick to the facts a bit more, but that didn’t work out. The primary word for turkey in Spanish today is pavo, which comes from the Latin word pavus, or ‘peacock.’ A closer look at Latin American terms finally seems to weed out other continents, countries and birds for a reference point. Depending on your locality, guanajo, cócono, chompipe and guajolote are all names for turkey, with the later most likely being the closest to the original Aztec. These terms don’t eliminate all confusion though, since they can also be used to refer to a stupid person.

Enjoy your _____, and have a happy Thanksgiving.

Source: The Etymologicon: A Circular Stroll Through the Hidden Connections of the English Language by Mark Forsyth, Berkeley Books